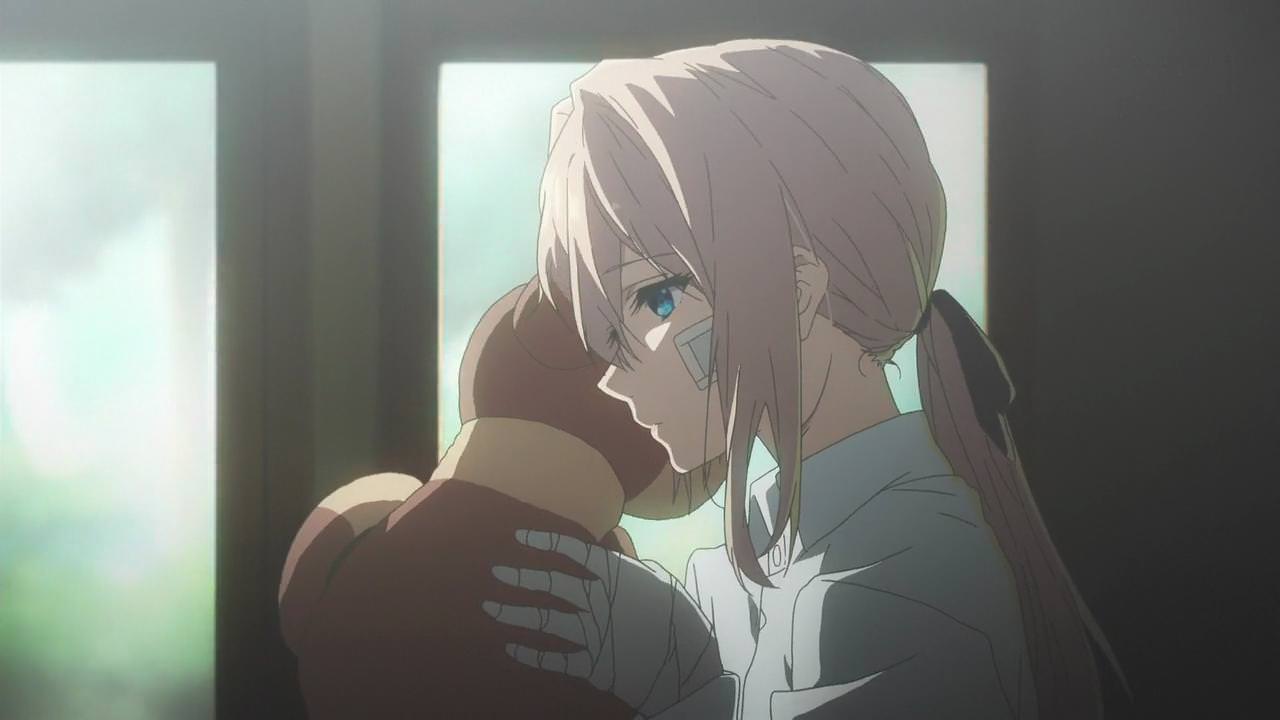 Hello and welcome to the Adaptation Notes series for Violet Evergarden. Violet Evergarden is a novel series written by Akatsuki Kana and it is so far the only Grand Prize winner of the Kyoto Animation novel contest. I have reviewed the books here and since the anime adaptation is here now, I have decided that I will be going over the adaptation differences and similarities I’ve liked and disliked while the show airs this season.

What I’m going to do and what I won’t

My intention for this blog is to always write about things that interest me. The problem is: Noting every single adaptation difference is so goddamn boring. I’ve tried doing a similar project with a show previously on this blog and ended up getting way too bored to note the differences and similarities in the adaptation. But while I’d rather tweet about this, it seems easier on the eyes and the mind to have something be on one page than a series of tweets. I’m still interested in these adaptation differences anyway. But I’m going to figure out as I go and pinpoint what kind of differences interest me and so on.

This post is meant for people who have watched the episode in question, but it should be fine for people who aren’t even watching the show and are curious what adaptation changes are done to the script. This won’t be an unbiased view of the anime adaptation because I will offer some value-opinion judgments as commentary. It is hard not to do so and I’ll try to provide insight into what the adaptation did right and wrong. These posts are going to be quite short by the looks of it.

Any feedback is appreciated as I try to fine-tune how the posts should read like. I’ve been excited about writing this series for a while and the adaptation changes should be really fun to track. I hope this project goes well.

How the show begins vs how the book begins

The first anime episode begins with desaturation: Violet and her major Gilbert walking by a market. Violet finds a green pendant that reminds her of her major’s eyes and wants it.

She wakes up in a hospital and is bandaged all over. She meets Hoggins, a friend of Gilbert, who tells her the war is over and her duty as a soldier is over. He also refuses to tell her where Gilbert has gone to — or whether he is even alive. Violet is adopted by the Evergarden family who is trying to replace the child they lost in the war. Unfortunately, Violet doesn’t like the sound of that and rejects the family before finally moving in with Hoggins in his new venture, the post office.

This premise sounds very standard and natural to begin from for anyone who has not read the books. It has a Charles Dickens feel to it thanks to the beginning. However, these scenes are actually adapted from the final chapters in both book one and two.

The book on the other hand begins with Violet embarking to be an auto memories doll, which is something like a scrivener position. People in this faux-European setting don’t know how to type, so they ask these auto memory dolls to type for them. The anime shows that in the second half, but the book just goes with it assuming you’ll get what she does. In this episode, she is already experienced and the plot begins to unravel in medias res. You learn through the chapter how Violet usually behave as someone who already knows how to type the letters people want to write. In fact, it shows her solving a problem and you get the feeling she’s dealt with problems like these before with differing degrees of success. The book progresses in formulaic episodes where she is hired by someone and writes for that person while solving the problems inside that structure.

The atmosphere and tone of the chapter are a far cry from the bloody battlefields of the anime episode. It is a relaxed yet melancholic chapter about grief and death. I won’t spoil the plot because this episode might come up later in a future episode; however, it works well as an introduction to the book.

The difference in the adaptation and the source thus comes from the tone. This can reveal the approaches the staff in Kyoto Animation are planning to use in order to tell their own version of the story.

When Akatsuki Kana began Violet Evergarden in that particular way, she wanted to allow the reader to soak in the atmosphere permeating from the book. For her, it was of crucial importance that the writing remained beautiful and purple prose-y to let the scenery characterize Violet and the other characters in the novel. Beauty characterizes Violet. She is good because she is the epitome of the platonic ideal of beauty. It is supposed to be slow and moving. We’ll talk about how effective that is in future posts, but if you read my review you should get a sense of how much I approve and disapprove her approach.

In the anime adaptation, the tone of the story is a bit different. Violet isn’t someone beautiful. She is a human character who has a soul. Maybe not so much a soul which has matured but she is learning what it means to love. This theme of learning to love is in the book, but it has always been on the fringe. What the anime adaptation did was extract it and let it breathe. For that to happen, original content needs to be written.

When Violet starts working for the post office, that is all anime original content. Her learning what an auto memories doll, her picking through letters, all of that are very much anime original content. Some of the content are inspired by the book; the workings of the postal office and Cattleya Baudelaire appear near the ending of the series. You finally get to see the postal office in the book at the end as if you can finally confirm what Violet’s been doing all these chapters based on the little details she has revealed in each episode. But as an anime adaptation, that would not fly. It makes more sense to build the post office setting as a base to ground the characters on.

Violet ends up being far more relatable in this version than the book by virtue of showing her in this setting. You see her grow and wanting to learn what loving is. You see her taking the job of an auto memory doll because she wants to be able to express her love for Gilbert the way other people could. And you see her find the meaning of love through her newfounded work as well as a meaning to her life after the war.

Both the book and the show too then have different kinds of cheesiness. The book is extremely sincere and honest about what it sets out to do, so it doesn’t take a while to full-on cheese. But the show reveals it almost immediately thanks to Ishidate Taichi’s love for Hollywood films.

A comparison is warranted here: think of Michael Bay’s Pearl Harbor where a bad romance inspired by James Cameron’s Titanic is on the backdrop of the most inappropriate setting, Pearl Harbor. Think of Michael Curtiz’s Casablanca, an actually good war romance film filled with one-liners about love, luck, and patriotism. Violet Evergarden‘s anime adaptation is going for those same heartstrings those films tugged a long time ago.

This isn’t the usual Kyoto Animation approach. Fans of the studio like their attention to cuteness, a strong sense of intimacy especially between women characters, and low-key presentation hidden behind flourishes. My favorite KyoAni work is Hibike! Euphonium, a gorgeous work that captures the light and atmosphere of everyday Kyoto. Violet Evergarden is going for spectacle and from that spectacle comes a kind of cheese people probably might not want.

But when I watched the first episode in the screening at Singapore, we all gasped and couldn’t breathe when the credits rolled. The emotions Violet felt or was learning to feel conflicted with what Gilbert ordered her to do: to live and be free. It made me forget that I was watching something with a too-sincere-it-is-corny kind of plot. It wasn’t KyoAni at all, but it was good. It was a damn good Hollywood film and I wanted more. So there it was, the mythic first episode that grabbed people’s attention: it actually put people into an arrest.

By all accounts, the first anime episode is far stronger than the adapted scenes in the book. But it also shows both the weaknesses of the anime and the book. The book lacks a cohesive narrative structure to thread these emotional arcs together, which is why it has no impact unlike the anime. The anime on the other hand has a tall order: it needs to deliver beyond the first episode.

A good Hollywood war romance film involves the drama of blood and the hope of love. What makes these films tolerable is their feature-length format; it is only 90 minutes long. Evergarden has to deal with at least ten more episodes with this tone. People may feel the excesses of the tone in the future and it would not be surprising for people to criticize its saccharine tone already. But I look forward to the staff overcoming these challenges because they seem excited about the project and showcasing it to the whole world.