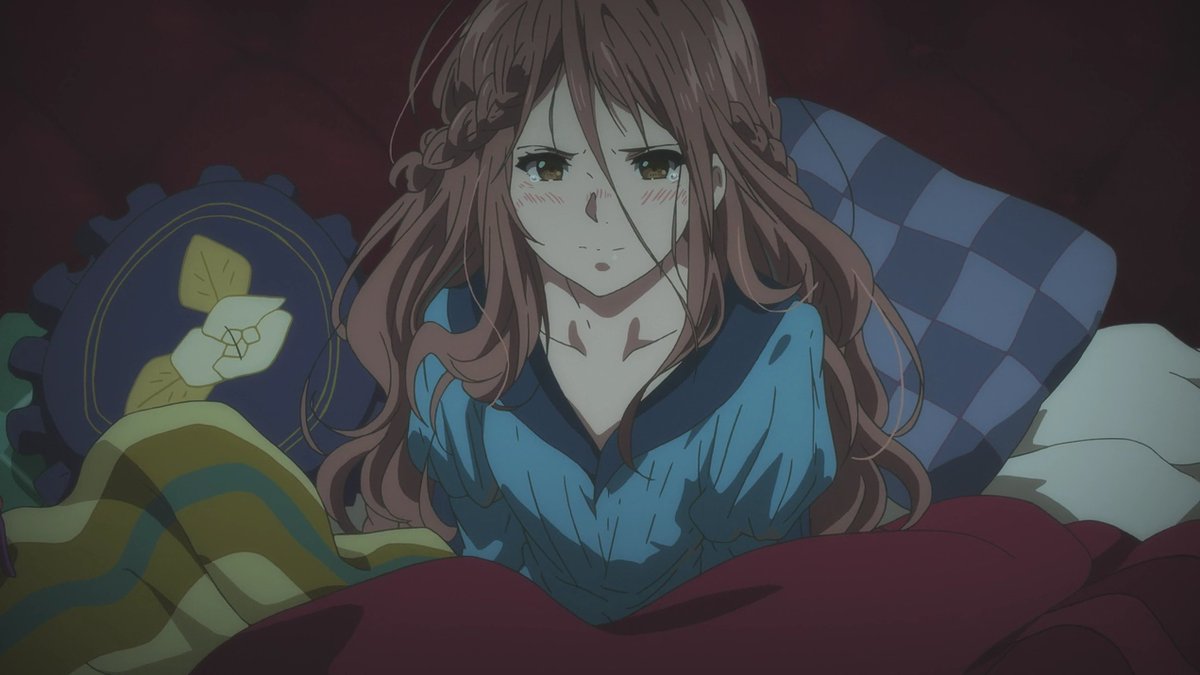 Hello, Chinese New Year was horrifying; that’s why I didn’t catch up with the Evergarden posts (and I was kinda tired of them for a bit). Anime is better. Thank God for anime. Let’s talk about the two other (and mostly) anime original episodes in one post. Feedback and comments always appreciated with these posts.

You might be wondering, “Oh no, two more original episodes? That’s four original episodes in a row! What could they possibly write about?” These pair of episodes are quite out of the blue for many novel readers; they don’t believe they add to the actual plot of Evergarden and that I can actually quite agree for.

But the anime actually shows how Violet is more competent as an Auto Memories Doll here and hints about the other kingdoms out there in the world. Iris, being anime original, has a home, which is also anime original. The culture, the cuisine, and certainly the environment contrast so differently from the cool, urbane setting where Violet is usually in. It is exotic with its bright hues and browny texture — like a medieval Hawaii Japanese village mix.

I also found it interesting that the KyoAni staff decided to create the world of Evergarden as if this little spot and the kingdom in the next episode are not enough. 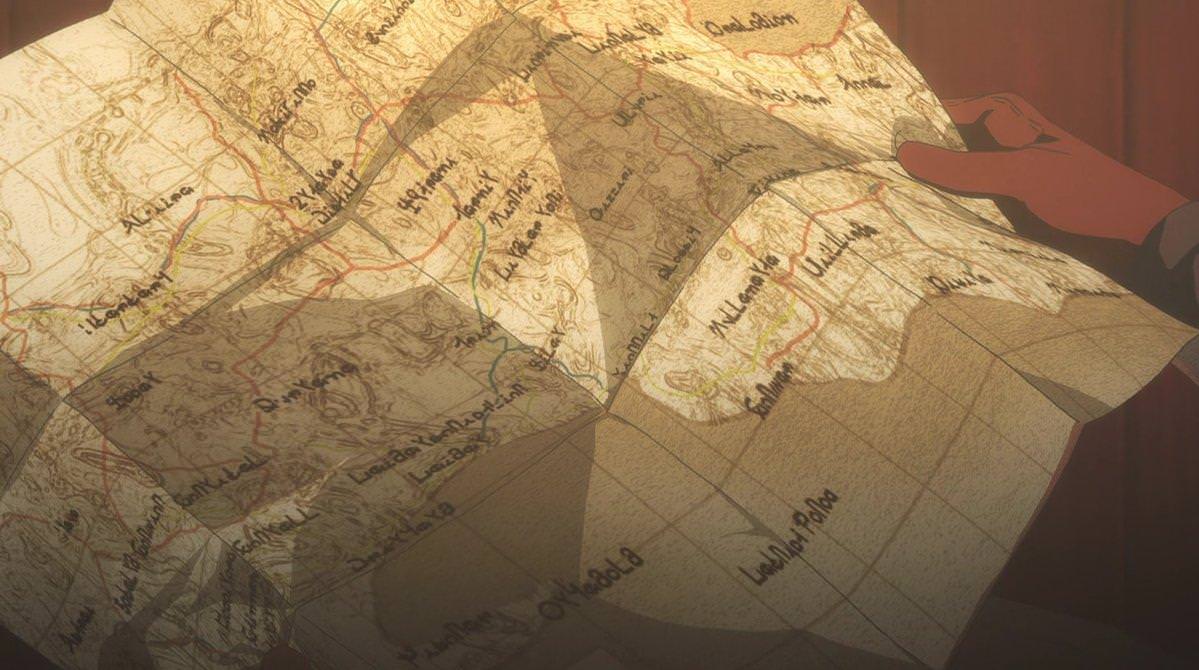 This map, which we see for a few seconds in the episode, is original. The fact that you don’t even see the whole map — part of the left portion is cut out — impresses upon my mind that the world is bigger and expansive than I can ever imagine. And it ain’t an ordinary map: geographical details like mountains and terrains are etched onto the map. It feels like a world you can play in some Elder Scrolls or something. That is quite an impressive feat for an anime that’s 13 (or 14, who knows) episodes long.

Whenever food, culture, and location are noted in the anime, it’s always a bit crazy to think this amount of worldbuilding is only relevant to this particular episode. And poof, it goes away and you are left with a small impression of that setting before moving toward another one.

That happens in the novels by the way. Each chapter is an impression of a setting that’s different from the rest. But the detail found in each episode in the adaptation is just absurd. We don’t know much about Iris’s family as well and yet, they feel true to life and have more to say than the episode is allowed to show.

That kind of worldbuilding is something I can dig for sure. It’s how we encounter worlds when we travel: only fragments and snapshots impress upon the mind when the real thing is far more alive and volatile. The people in them have their own stories and we’ll only see a bit of them.

That’s good storytelling in my opinion.

Episode 5: The Castle of Yamada

The fan favorite director Yamada Naoko (Koe no Katachi, Euphonium) comes back with possibly the most cheesiest heteronormative story of all time. It feels like the episode is made just for her.

In this episode, we deal with two kingdoms and their politics hidden by love letters sent between the princess and the prince. The glamor of reading aloud these love letters is the surface, of course; however, there are real political repercussions that the princess might face if this doesn’t go well. It is why she needed a professional. So she employs the post office (duh) and Violet’s on the way. This episode may possibly be the best adaptation of Princess Diaries of all time.

I wonder where the idea of this episode comes from. It feels like something you’d read out of the British tabloid papers about the Royal Family. I actually found this episode quite fascinating, not so for the content, but how it accurately replicates the bullshit found in following these stories.

The episode seems self-aware about this too. As more dumb love letters are sent between the two parties, the princess feels like she is lying. So the ending involves her writing by herself.

According to ultimatemegax, this is actually a story that was “submitted for the ‘awards’ but didn’t make it in the two novels due to the length.”  It will come out in the side story coming out later. This follows the pattern of side characters becoming the protagonists in their particular episodes at Violet Evergarden. The novel does that for the most part, but this anime episode’s script overpowers the usual stuff and actually feels good to see the princess be an individualistic character for once. It also helps that she is very cute and wears the most adorable pajamas. I’m quite curious how the original story pans out.

Anyway, I really like this episode when it comes to the themes, even if the cheese proves to be too much for me. Maybe it’s Yamada’s directorial style which always comes out as sincere and honest that it really works out in the end. Only she could make such a damn cheesy story work. Seeing the princess grow is way more satisfactory than the novel content. I can’t find much fault with this episode except it’s not really to my personal taste. I hate cheesiness.

For better or worse, the novel content’s back

After episode 5, we’re back in the territories of the novel. If you like that episode, you might not be able to find the same highs and thrills in the later episodes. It’s still cheesy and romantic, but it doesn’t have the ambition of 5.

You won’t get interesting techniques used like the montage showing the princess and the prince sending each other letters. Instead, you’ll find a very condensed story from the books. The omissions feel somewhat jarring when I’m used to the pacing of the anime original episodes. It’s pretty clear the anime original episodes use the 24 minute format damn well. The same can’t be said with the novel adapted episodes.

They aren’t that organic, I feel. I’ve always felt that Violet Evergarden would benefit better from more anime original episodes and I was honestly surprised they went with four anime original episodes so far. I expected the show to just go full-on anime original and I wouldn’t have minded that — it won’t be the first show to have done that well; Hayate no Gotoku is a great example of that — though, it wouldn’t make sense why KyoAni’s marketing team would blare out the “GRAND PRIZE WINNER” on the anime all the time.

Don’t be too surprised if the show felt like it dropped in quality. The novels weren’t that good anyway.

One of the nice things of being late to the game is that I get to link more stuff that’s already been published. For this episode, Emily Rand has written about floriography in her blog. I recommend that because I know nothing about flowers and the visual language of flowers employed by Yamada is really helpful to understand the episode as much as possible.

Zeria of Floating into Bliss did a video (you can read the script here) on defending Violet Evergarden. She mentions episode 5 in particular on why the anime is worth watching. I agree with this assessment.

kViN of Sakuga Blog was just as lazy as me and wrote a post on Episode 4 and 5 too.