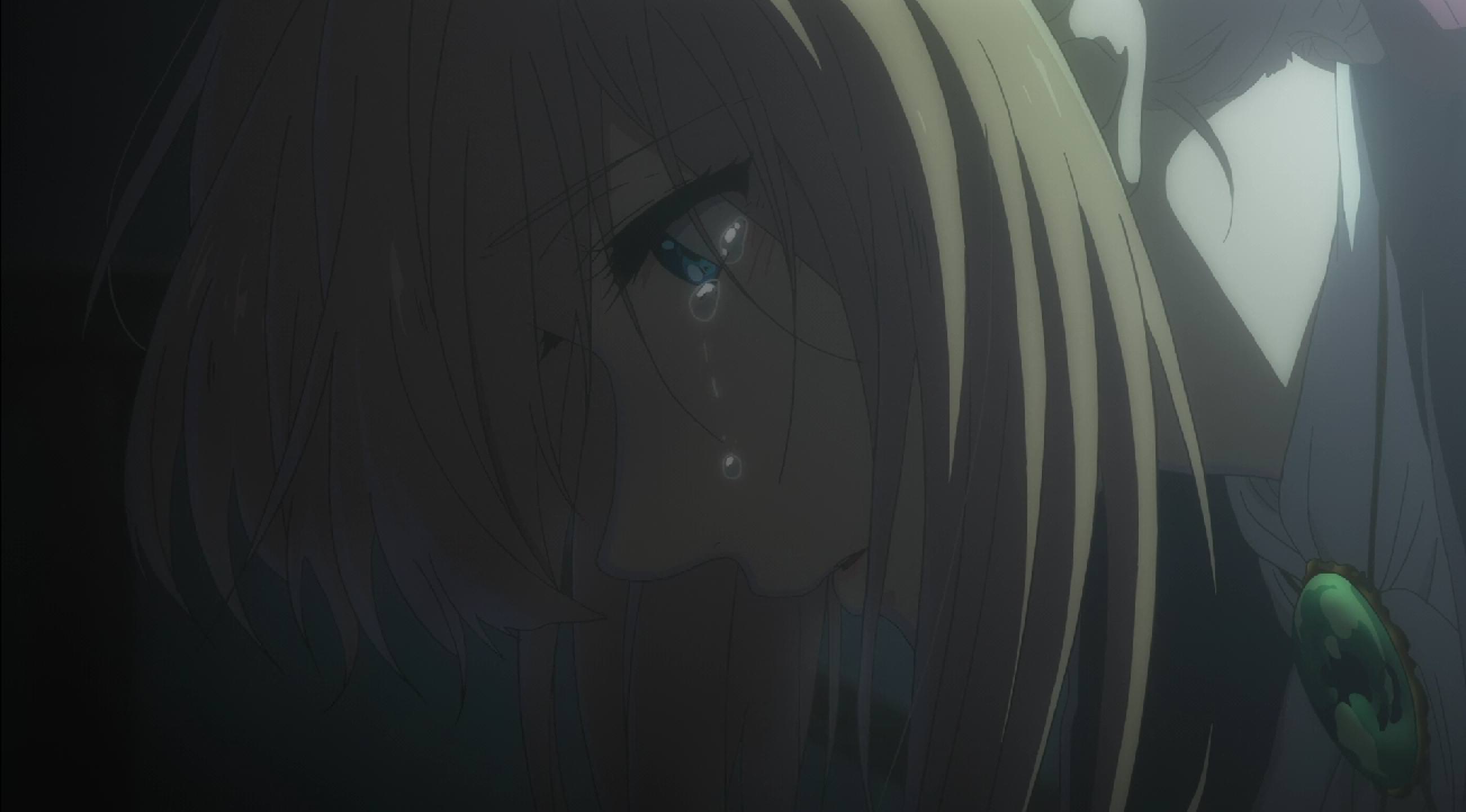 These two parter episodes are adapting from the same source chapter, so we might as well talk about them both.

I am not a fan of the direction the Violet Evergarden novels took near the end. It became a typical war story with a romance subplot and there were pointless details about the technology and strategies with it. It’s not like you understand why the kingdoms are at war; no political ideologies or even war themes surface in these books. They just happen and I never thought the charm of the novels are related to the war anyway (the writer just wants to write stories about war and love…). It’s difficult to find myself invested into the politics of the world.

So it’s good that the eighth episode in the anime cut down a lot of random military details, including the exam where Violet formally becomes a soldier. It never felt necessary to me and bogged down the pacing. Since anime adaptations have to go for pacing, this was the best decision.

Instead, it focuses its direction on the more interesting relationship between Gilbert and Violet. In the novels, it’s a tad romantic. Gilbert has guilt all written on his face and he isn’t really a good guy. We actually see Violet growing up to be an assassin from his point-of-view. Gilbert is characterized by how he is ambivalent about Violet; he thinks she is beautiful, but she is an important asset to the war. Violet can’t be treated as a romantic partner. He hides his feelings of love inside himself and commands her like a typical soldier.

In the anime, Gilbert is more of a parent a bit like Hodgins in the first two episodes. For better or worse, there’s also more emphasis on how he raises her up to be a good soldier but he also wants her to be a human. It’s a parental kind of love and adds to the infantilization of Violet (there is even a scene where she learns how to say her name like a baby). His guilt comes from his parenting and wondering how she’ll live in the future.

It’s quite hard to muster up any feelings for this episode. I just thought it was okay. It’s clearly a prologue to the better episode, the ninth episode.

Director Takemoto loves his Hollywood and this episode really tells. You can see limbs being torn off and hear the horrifying sounds that go along with it like it’s a scene from Saving Private Ryan. The violence is mindless and miserable. No music plays with it. And we all know what this buildup is leading to since we’ve been seeing the flashbacks with Gilbert. This is the beginning of the end of Violet Evergarden.

Using the eighth episode and the various references in war in the novel as a jumping point, the ninth episode takes its script to a whole new level and explores Violet’s psychology as a character. There are many examples of that, but the biggest and most effective one is the split second where young soldier Violet salutes to adult scrivener Evergarden. It is possibly one of the most satisfying moments that show how even the littlest of anime original content can help in an adaptation.

Speaking of which, much of the grief and despair Violet feels is anime original. You don’t really feel Violet’s emotions in the books when she learns about the inevitable. The anime on the other hand just blatantly shows Violet trying to choke herself to death. It also shows her being unable to stop crying.

The relief, also anime original, comes in a very cheesy manner that is more heartfelt and accessible to me. To show Violet’s journey, we can see the characters she has helped succeed in their lives and everyone is trying their best to communicate in their very own way. It’s a predictable plot device that still makes people sob and I’m surprised the novel didn’t even try using that when I saw how effective it was.

The ending of the ninth episode makes me choked too. Violet staring at the vase of violets before the scene transitions to Gilbert naming Violet is an intensely emotional scene. I never thought there would be a better episode than Yamada’s episode five, but this ninth episode definitely takes the cake.

I feel that the anime could have ended it on the ninth episode. It already feels like a finale and it’s better to leave it that way. But we all know there’s at least four or five more episodes left. I can think of one plot detail KyoAni might adapt that can prove to be controversial and people might feel cheated like I felt if it does get adapted. Let’s hope that’s not the case.

There’s still obviously more to adapt, though I can’t care too much about what is left to adapt. This is kinda enough. But for the curious, let’s talk about how many episodes have actually adapted chapters.

The book has about twelve chapters, each volume having six.
Episode 1 is somewhat adapted, some of its content from the final parts of volume 1 and 2 but it is distinctly anime original.
Episode 2 to 4 are completely anime original.
Episode 5 is adapted from a story that couldn’t make it to the books but will be out in a future volume.
Episode 6 adapts chapter 4, volume 1.
Episode 7 adapts chapter 1, volume 1.
Episode 8 adapts half of chapter five and six in volume 2.
Episode 9 is inspired by the content in episode 8 and is mostly anime original.
This leaves about 8 chapters that have not been adapted. 2/3rds of the book have not been animated yet.

It’s a bit weird that the show advertises itself as an adaptation of the grand prized novel when it has skipped out a lot of content. But I can’t really complain; I didn’t like the novel anyway.

The last few episodes could potentially adapt some more chapters, but they don’t feel necessary. Whatever it is, I am morbidly curious because there’s not that many paths the anime could take. I hope the new episodes don’t ruin the impact of the ninth episode.