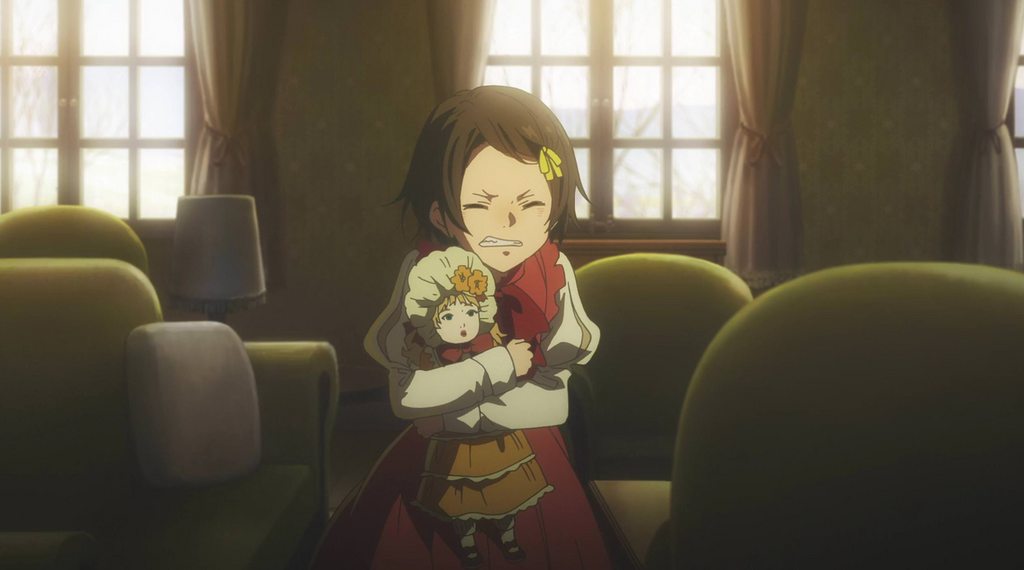 Well, there’s a bunch to talk about in this episode, so let’s go right to it.

This is the adaptation I’ve always wanted

When I started the Adaptation Notes series for Violet Evergarden, I expected something to blow my mind. Most of the episodes are quite normal and good, but they aren’t that special to note about. The ninth episode was reaching that spot though. However, since it was too much like a finale and it did adapt the final parts of the books, I — like many people — can’t imagine what will happen afterwards.

I did know that Evergarden would need to take a step back and adapt previous chapters. Most of them are average or really bad. Take episode 7 for example, which adapts the first chapter. It’s a really good opening to the novel, but as it is in the show it’s just okay.

However, there was one chapter I did like and it was the reason that gave me hope the books might be something special before I got really disappointed with it. It was a chapter about Violet visiting a young girl and her sick mother. That chapter was the second episode in the book. I thought it approached a really nice balance between sentimentality and plotting.

I didn’t think that chapter was going to be ever adapted though. Not after the “finale” of episode 9. It felt extremely backwards and too standalone when Violet has pretty much finished her “coming of age story arc”.

But when I began watching the episode with my watching partner, they didn’t start the episode properly and told me to go back. I got to see a young brown-haired girl play with a doll and she looked very familiar. Way too familiar. I connected the dots fairly quickly and realized this was the adaptation I’ve always wanted.

The tenth episode is adapting the first volume’s second chapter. “Well,” I told my watching partner, “I know what’s going to happen. This is going to be something special.” My posts for Violet Evergarden have always been ambivalent at best since it reflects my loss of faith in the books. But I think this episode might break me.

And it sure did.

The novels have always lacked a personality to bring their content onto the table. But Ann is a different character altogether. She is literally a kid and the novel takes her point of view. There is a mystery between Violet and her mother. What are they doing? Why can’t Ann go inside and help out?

The mystery only works because we don’t know much about Violet. At this point in the novel, we know Violet is a scrivener of sorts. But she is also kind toward Ann and plays a lot with the young girl. There is a small scene where Violet is assembling a gun together and Ann asks Violet what she is doing. Violet replies that she is planning to go to a battlefield for her next mission; it’s a small foreshadowing to the next chapter where she does go to war. Ann takes on the confused reader’s role and speculates at her vocation as a “walking doll”. She thinks of Violet as a それ (“that thing”) who might steal her mother from her — an even more detached view of this mysterious character. Ann admires her as a beautiful figure, but she doesn’t know her.

But that won’t fly of course in the anime. We already know Violet’s backstory deeply and even see her emote wonderfully. So the episode doubles down on Ann’s point-of-view. We see everything visual from her eyes; she can’t hear what Violet and her mother are up to in another room. To her, Violet is a walking doll who is just like the doll she brings about and she wants to play with her. Ann gets a bit jealous, of course, since Violet does end up writing for her mother a lot. However, Ann takes a more proactive role in trying to get Violet to play with her. She really likes how Violet is a real walking doll and thinks it’s amazing to have a doll talk to another doll. And unlike episode six which rushes through its adapted content, we see many interactions between Violet and Ann, way more than what is found in the book. It’s quite heartwarming to see how much Ann admires and loves Violet.

We also see Violet emote. She smiles and rarely has a neutral facial expression except at work and the scene where she offers herself to be a punching bag for Ann. While it is a little detail on how much Violet has grown, it later pays off at the anime original end in the post office. The reason she smiles at these moments and remains neutral in others is because she is trying to hold back her tears. She knows what will inevitably happen and wants to be strong. The novel Violet was a professional who revealed no weakness; the anime Violet is as human as we are and can’t handle the solitude Ann will have to face, so she cries in front of everyone in the post office. She is becoming self-aware of her position as an orphan too.

For Ann’s arc, the anime uses the novel’s ending, but it is far more satisfying to see Ann grow up and have her own family. This is the scene I’m pretty sure everyone cries at. Seeing Ann and mom dissolve away from the background, her mom’s bed becoming empty, and then her attending her mom’s funeral is heartbreaking. 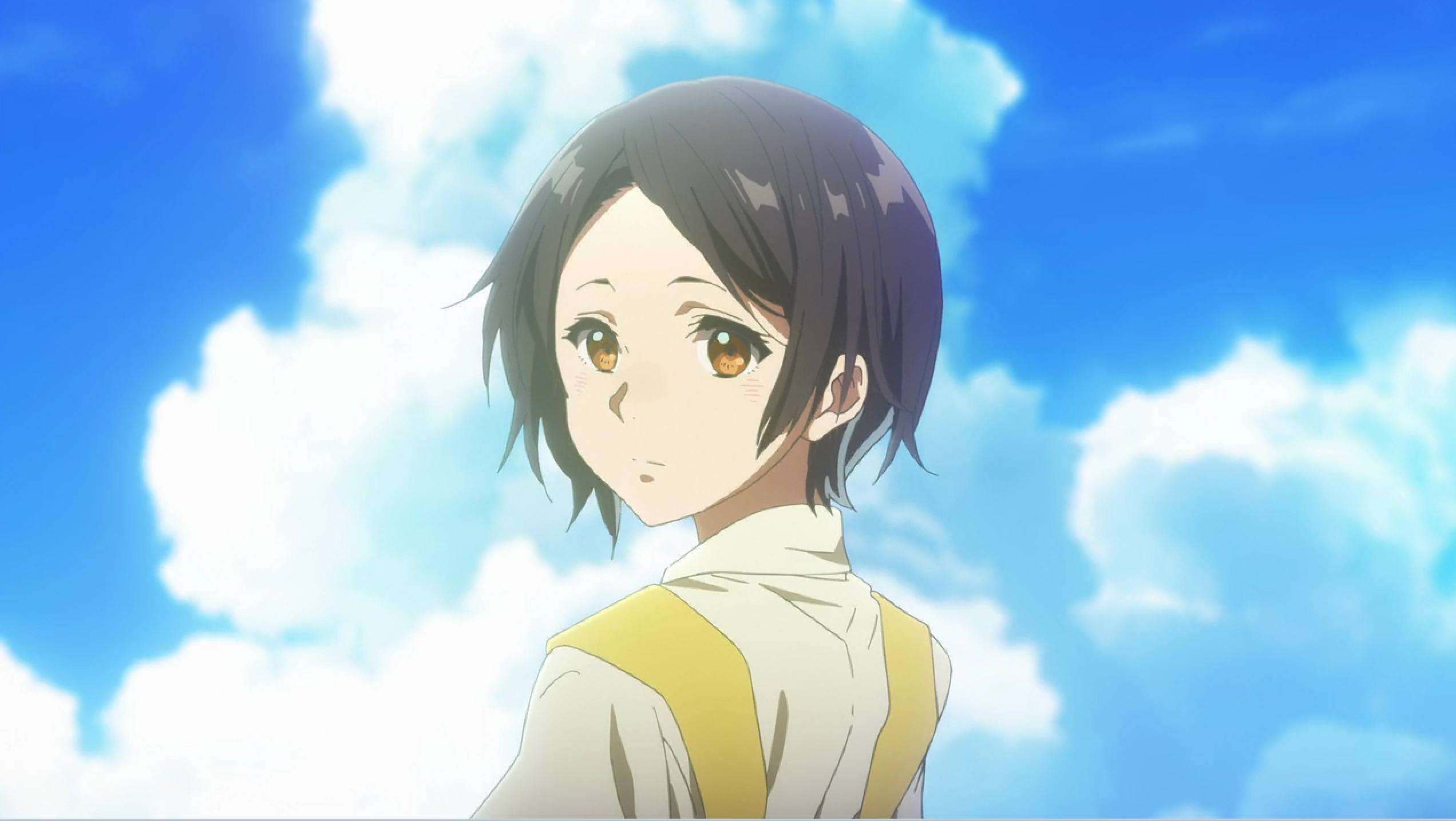 These are minor differences, but they amount to a lot in the long run. While condensing and adapting some of the better parts in the chapter, the staff has to find ways to make the episode work in the plot structure they’re going for. Ann’s arc shows this difference in how the two mediums approach emotional climaxes. The context of how there is no such thing as an unsent letter is in both works, but the anime has the foresight provided by the bearded man in the post office at episode nine. So in the novel, this is supposed to be a taste of what is to come. In the anime, it is the taste itself. This is why you have watched Violet Evergarden — to see this one scene.

It is an understatement to talk about how this episode has made everyone felt something. kViN of Sakuga Blog simply DM’d me with “I cried……” and other tweets are enraged at how good this episode is. It is surreal to be part of a large anime audience and hear everyone cry, but it’s also why I signed up to write the Adaptation Notes series too. I knew something like this was going to happen, though I did lose faith in it a couple of times.

There’s a lot of care toward this episode and that effort resonates with everyone who is watching the show. Even I admit while the episode is cheesy, it did something to me. It reminded me of the hope I had reading the novels before it became a trainwreck. I wanted a very good read, sentimental it may be, to break me down. My cynicism and lack of suspension of disbelief are always obstacles to finding good works, but the second chapter of the first volume did get to me.

This episode revives some hope inside me. I wasn’t too much of a fan of the nine episodes, even if I find them okay. But the tenth episode shows there’s still potential brimming. There are four more episodes to go and I don’t know what’s going to happen. I used to see it as a disaster, but now I’m interested — no, invested in what the future four episodes will be.

Maybe the show won’t be the “overrated KyoAni show” anymore thanks to episode 9 and 10. Maybe it deserves the hype. Maybe it can be something quite good that everyone will like.