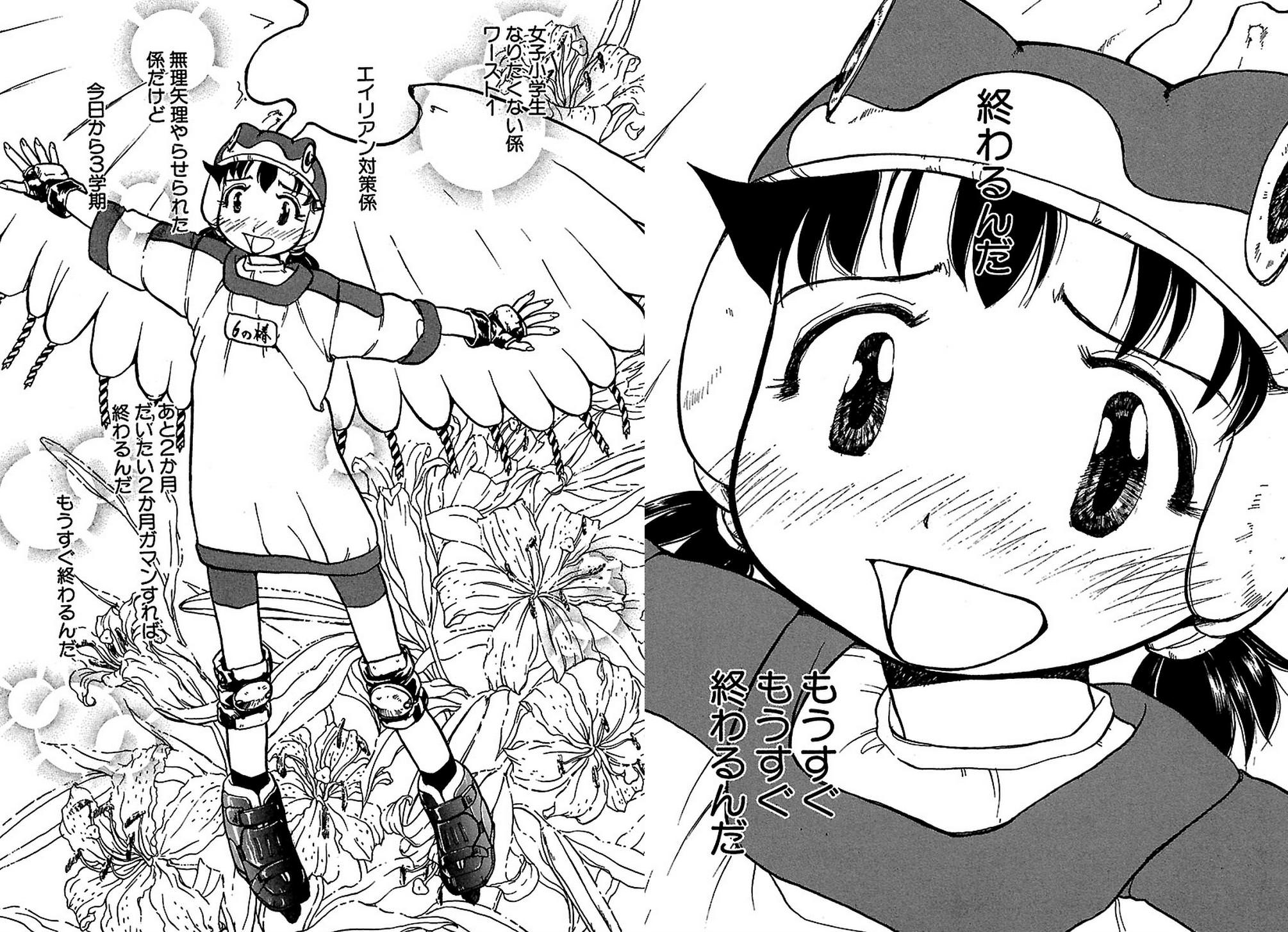 Ootani Yuri is just like us: she hates responsibility.

Cleaning classrooms after school sucks and involves so much work. Plus, she has been selected to serve in the Ninth Elementary School Alien Defense Squad alongside two other girls, Toumine Kasumi and Kawamura Kumi, as class representatives for a year. Aliens dirty up the place and make it dangerous for students and teachers to walk in the hallways. They may attack or worse, disrupt the classroom. It’s up to Yuri and friends to let an alien species called a Borg latch onto their heads and, with its powers, make the school a safe environment to learn and play.

It’s a simple, cute premise that we can all relate to. Who doesn’t relate to Yuri feeling utterly uncomfortable about the Borg sucking from her naked body? We all had that feeling with our own Borgs. It isn’t unusual to feel afterwards being embarrassed and humiliated to the point you don’t want to graduate elementary school; you’d rather close up in your room and die.

But you have the responsibility to take care of the pesky aliens. 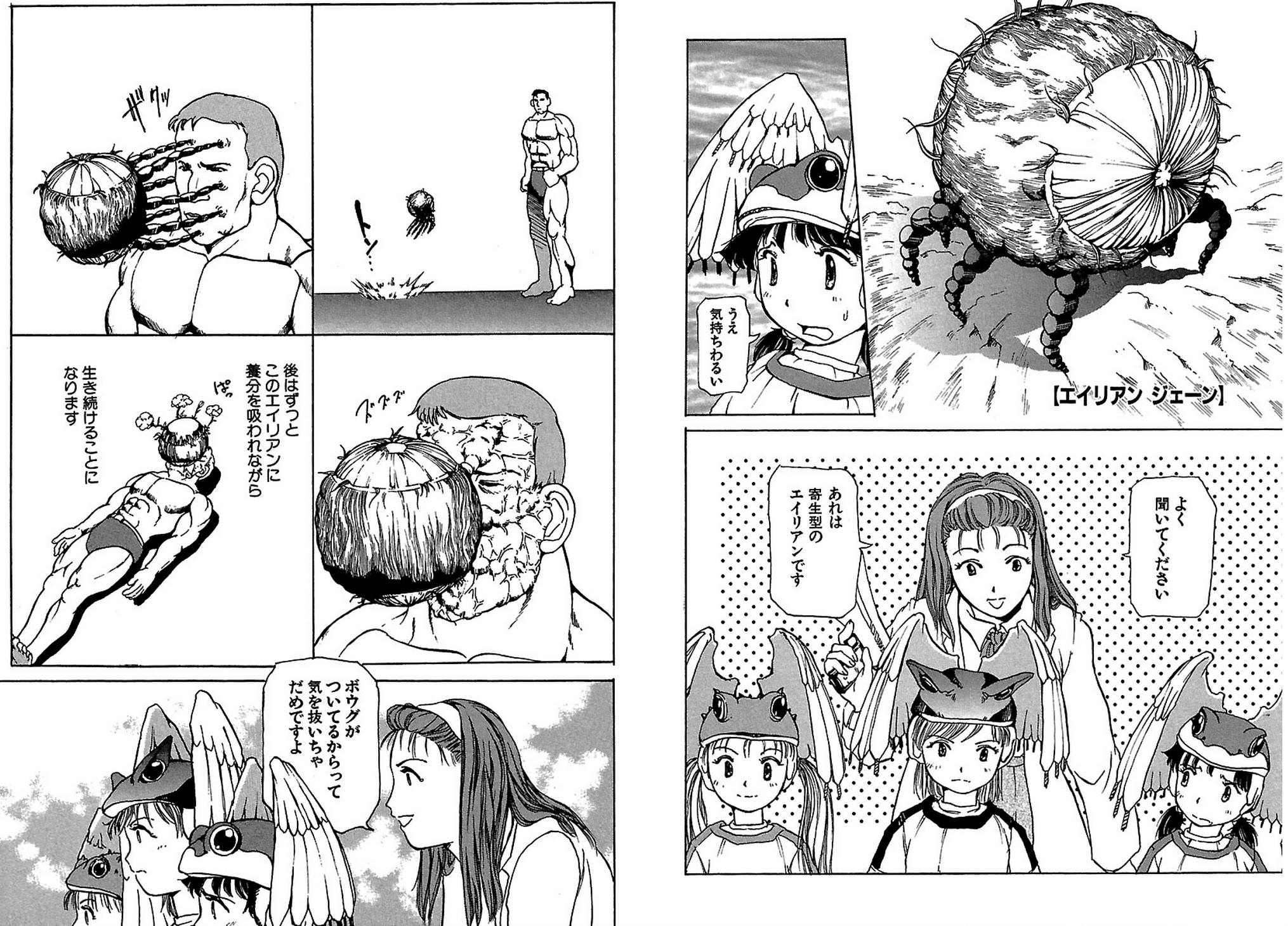 No one is going to do it besides you.

Responsibility exists for a reason. You don’t push away the tasks that are delegated to you. You accept it and move on. You tell yourself you can do this because you are the only one who can do this. 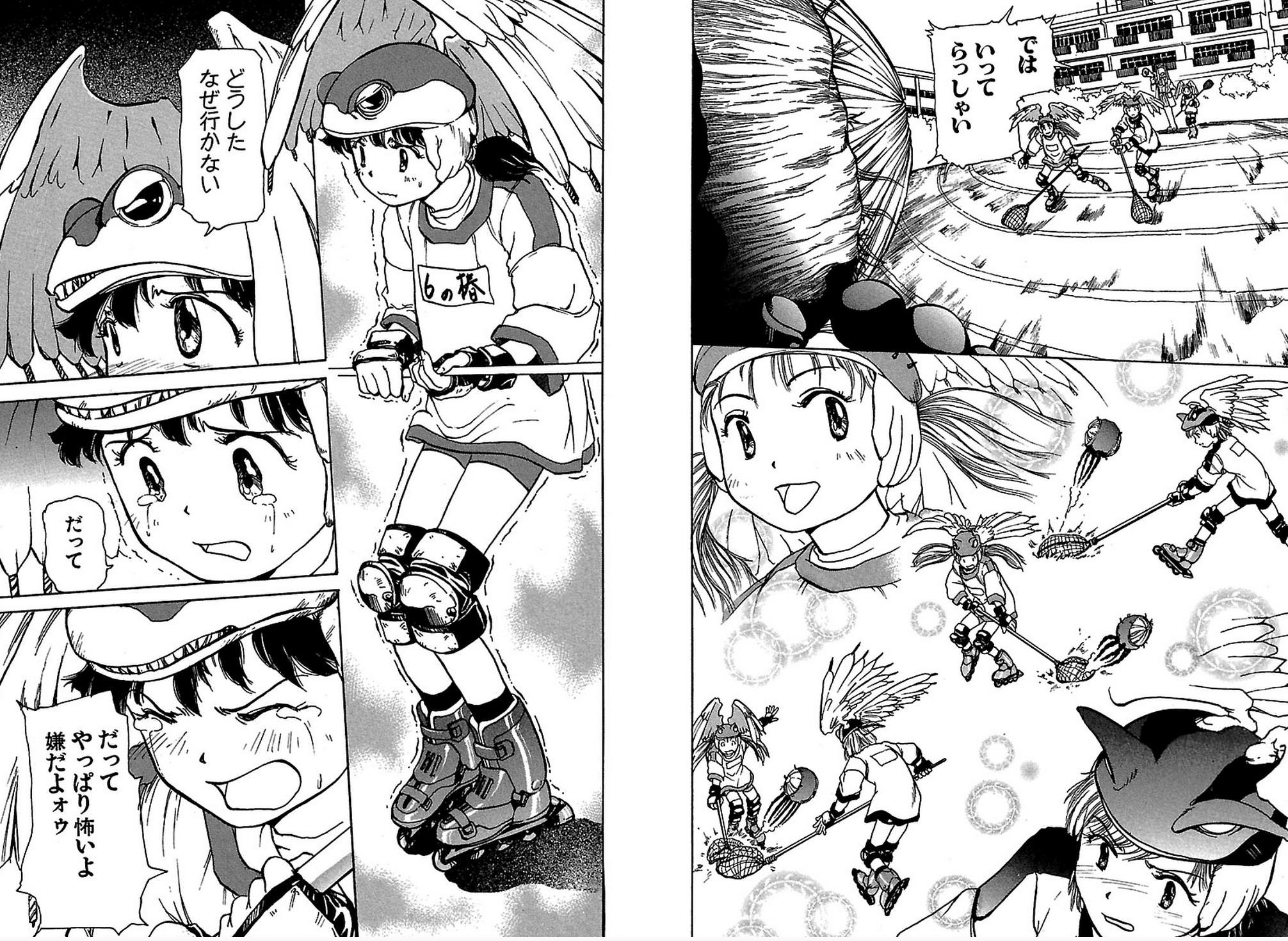 So you play a mean game of lacrosse with the aliens.

If the plot of Alien Nine doesn’t make sense, maybe it’s because you haven’t warmed up to its peculiar worldbuilding yet. Maybe you haven’t immersed yourself in its culture yet. The impenetrability of a culture only feels so because we’re not a part of it. It’s like learning a language; there’s no point in learning the words without associating them to the objects or concepts in the culture. That’s why every language learning source tells you to get deep into the culture.

Worldbuilding functions the same way as cultures do. We need to get into the mindset of a character in that world and see them behave in order to learn about the norms and values of the society they’re in. Good conduct can only be learned by observing others. Taboos to avoid are only possible if we learn from our mistakes. So what better way to learn about a literally alien world than in the eyes of an elementary school student learning about the world they’re in?

Schools are after all institutions that help understand the normal ways of the world. In the long run, school lets us understand what we perceive as quirks and injustice of the system not as mistakes but as part of a greater order that is incomprehensible to us all. They are where our first encounters with morality, responsibility, and the world take place.

Which is why it feels somewhat hyperbolic to describe schools as a prison of the mind. Educational propaganda serves to help orient us toward the culture we’re in. Schools don’t teach you the practical facts of life — they leave that to the parents and the experiences kids will encounter in their adventures — but the shared cultural history people have. If there is fault in the propaganda, then it’s probably more to do with the culture that fostered its creation than the teachers and principals who have to propagate its nonsense.

In the case of Alien Nine‘s setting, this education is the only way for kids to make sense in this savage world of aliens. 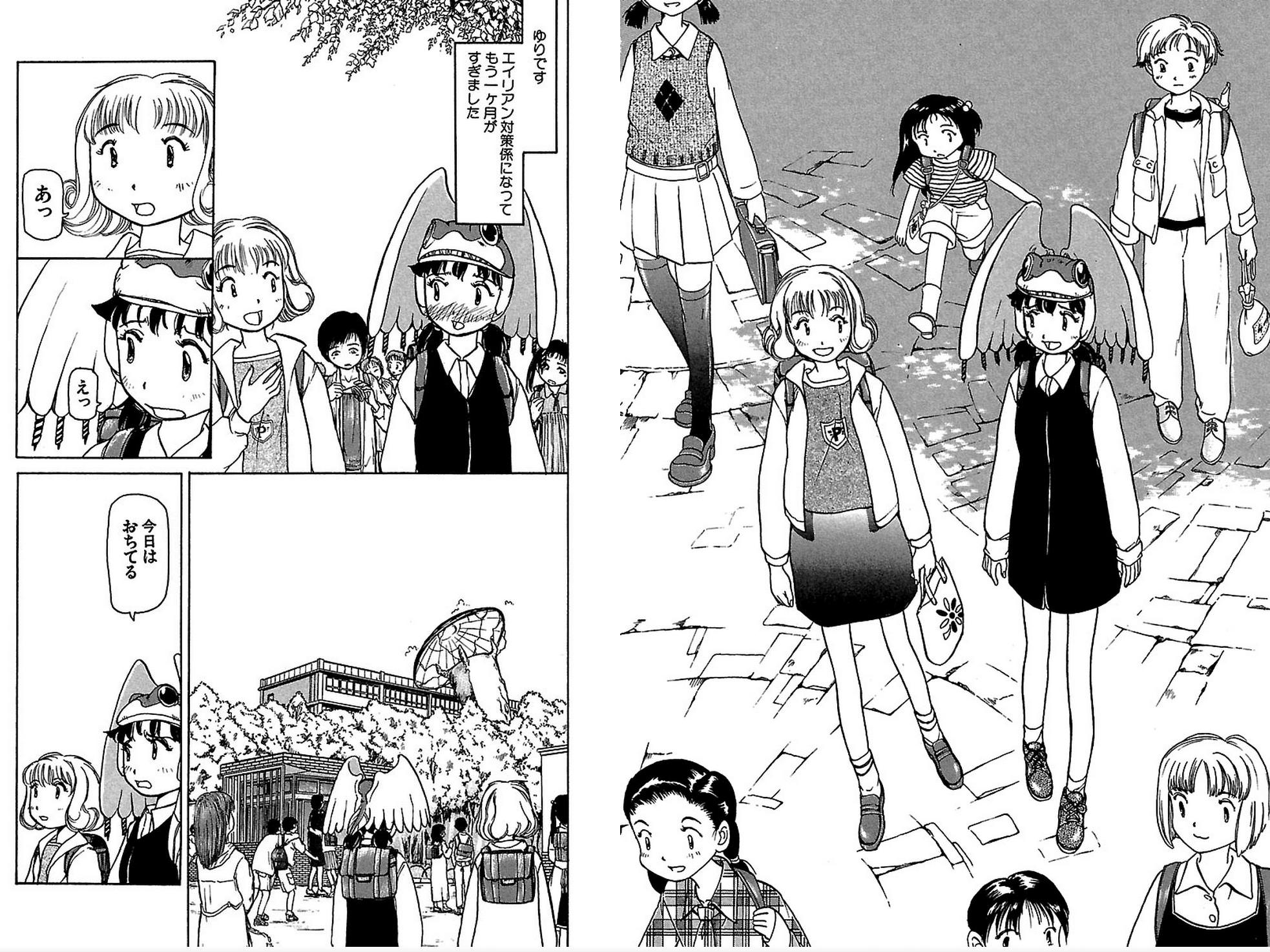 The three girls are learning what is to be their everyday life in the future. Much like how how we study to prepare for exams, Yuri, Kasumi, and Kumi are preparing themselves for the unforeseeable future.

But kids are kids no matter where we go. They can be grossed out, they can feel belittled and discouraged, and they can go rogue and do something of their own accord. Stress from learning the do-s and the don’t-s leaves the kids vulnerable to other kinds of danger from the world.

It quickly becomes overwhelming for them when things don’t go as planned.

And that’s why Yuri is our protagonist. She cries a lot because she doesn’t understand the world. She represents our natural reaction to a world that is clearly abnormal to us. Her friends, no matter how much she loves them, mystify her. She is a scaredy-cat. She can’t do anything. She doesn’t want to do anything. She feels like an outsider to the culture she lives in.

But that’s not true. We can’t be in her shoes, but Yuri is still part of it. She can’t close the manga like us; she lives in that world. She treats the aliens as icky things like bugs and the gore as something ordinary. And the matter-of-fact tone present in the manga shows this is the world she has to put up with. She hasn’t learned everything about the world and that’s why she is afraid of it.

Because this is what her adulthood and her future will be like. People are counting Yuri and her friends to be adults, to be the successors of a world where humanity can coexist with the aliens. 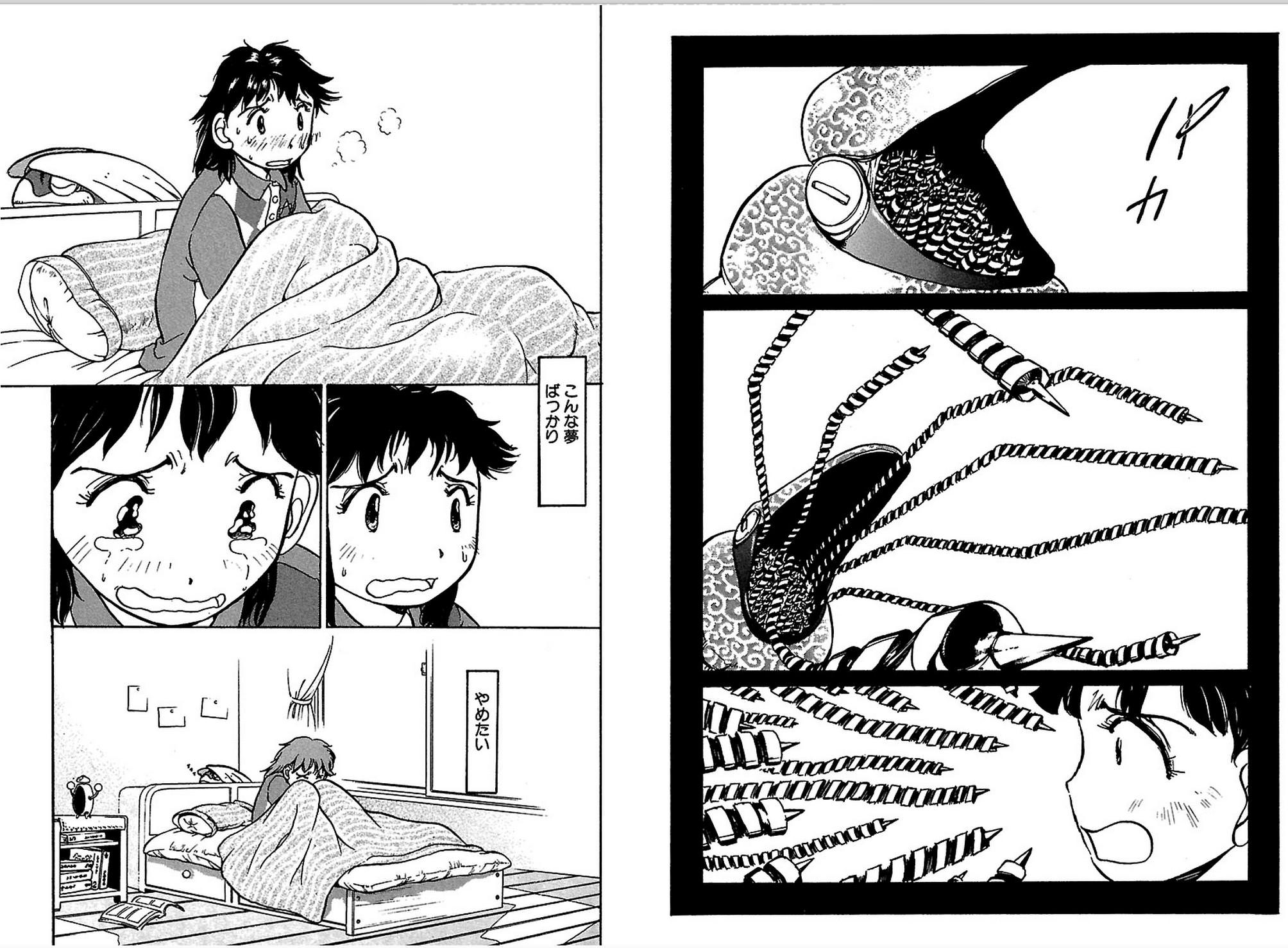 The typical coming-of-age story is now a horror work.

There is nothing romantic about attending elementary school and learning how much is expected out of you. This is the first time you will ever feel helplessness. The more you learn why the world is like this, the more you are told that you are responsible for how the world will revolve. Children have to undergo myriad panic attacks, identity crises, and alienation phases in order to be an adult.

So they fear the unknown. They fear the very concept of responsibility. They want to run away from their duties to shape the future. They don’t want their innocence, their most important illusion, to shatter away.

This is why we indoctrinate children in education and guide them. We make them attend classes like sex ed even earlier nowadays, so they can find out what the outside world is like. They may uncomfortably giggle their way out of the classroom, but we can’t let them off the hook. Children will decide how the world will revolve, whether we like it or not. 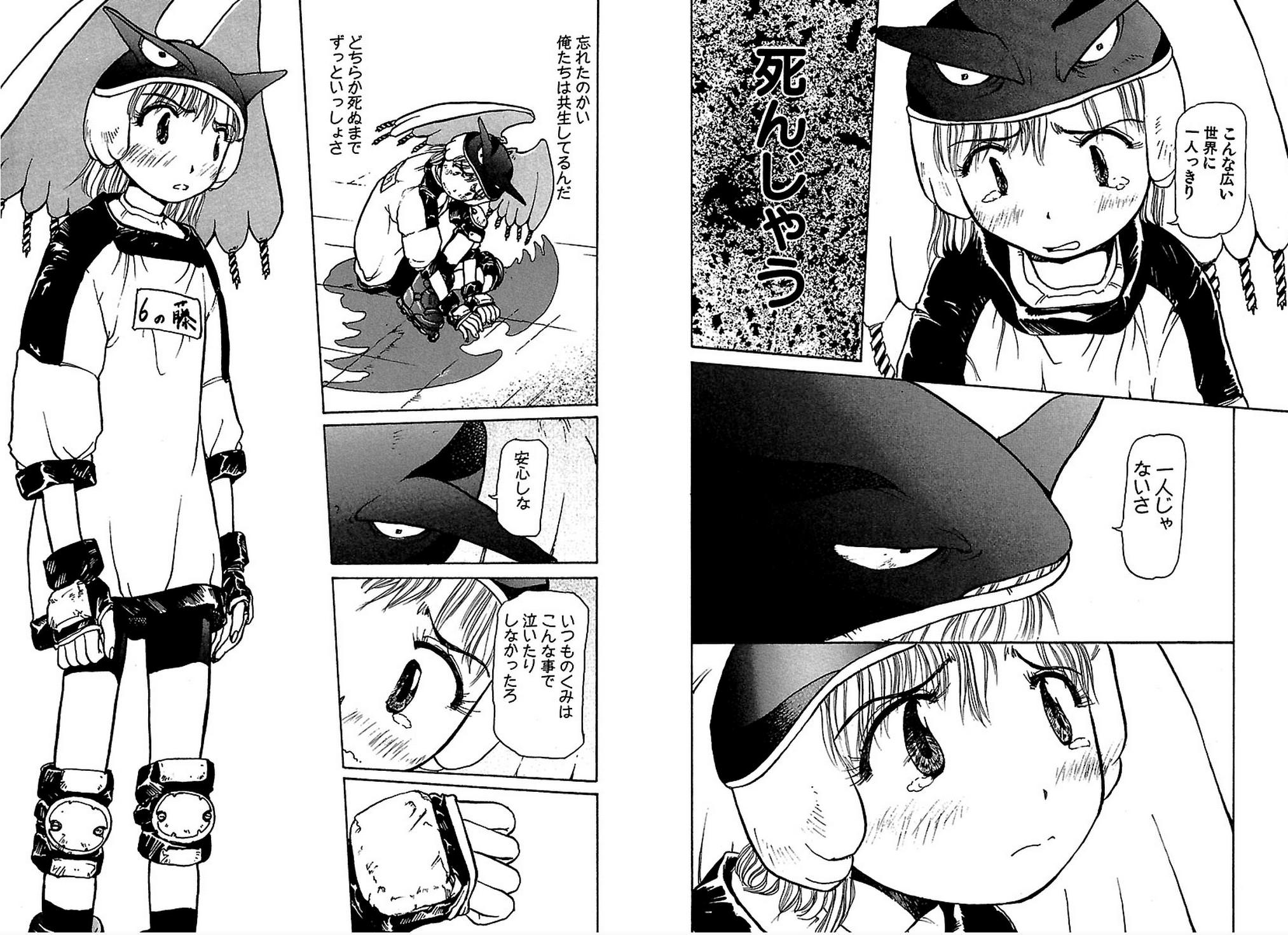 We force children to “rapidly evolve” to become adults. We want to speed up their “evolution”, so they can be ready to decide the world’s future when the time comes. We want them to grow up.

That’s how the transhumanism in Alien Nine works. Some alien species require a host body and not all humans have evolved to endure the side-effects of cohabitation. Adaptation and compromise are necessary for humanity’s survival.

And so, the three girls have literally become the future of humanity.

Their obligation to their duties is not alien to us. We feel that tinge of familiarity toward Alien Nine‘s world because we aren’t that different from the people there. We recognize our ideas and philosophies twisted to work in their own cultures, but nothing has changed. Social phenomena like bullying may come up in a different form, but the idea remains the same. In fact, we don’t need explanations why the world is like this.

It’s just our world with aliens. We tell kids all the time to grow up and be responsible. The future is in their hands. We shove the burden of responsibility onto them. It’s no wonder kids cry.

They are fighting for a future they don’t understand.

For the girls, losing their innocence is just one consequence of growing up. They know they are different and can’t always mingle with old friends anymore. Everything they love must be left behind.

They are adults now. They are responsible people. They are the future. 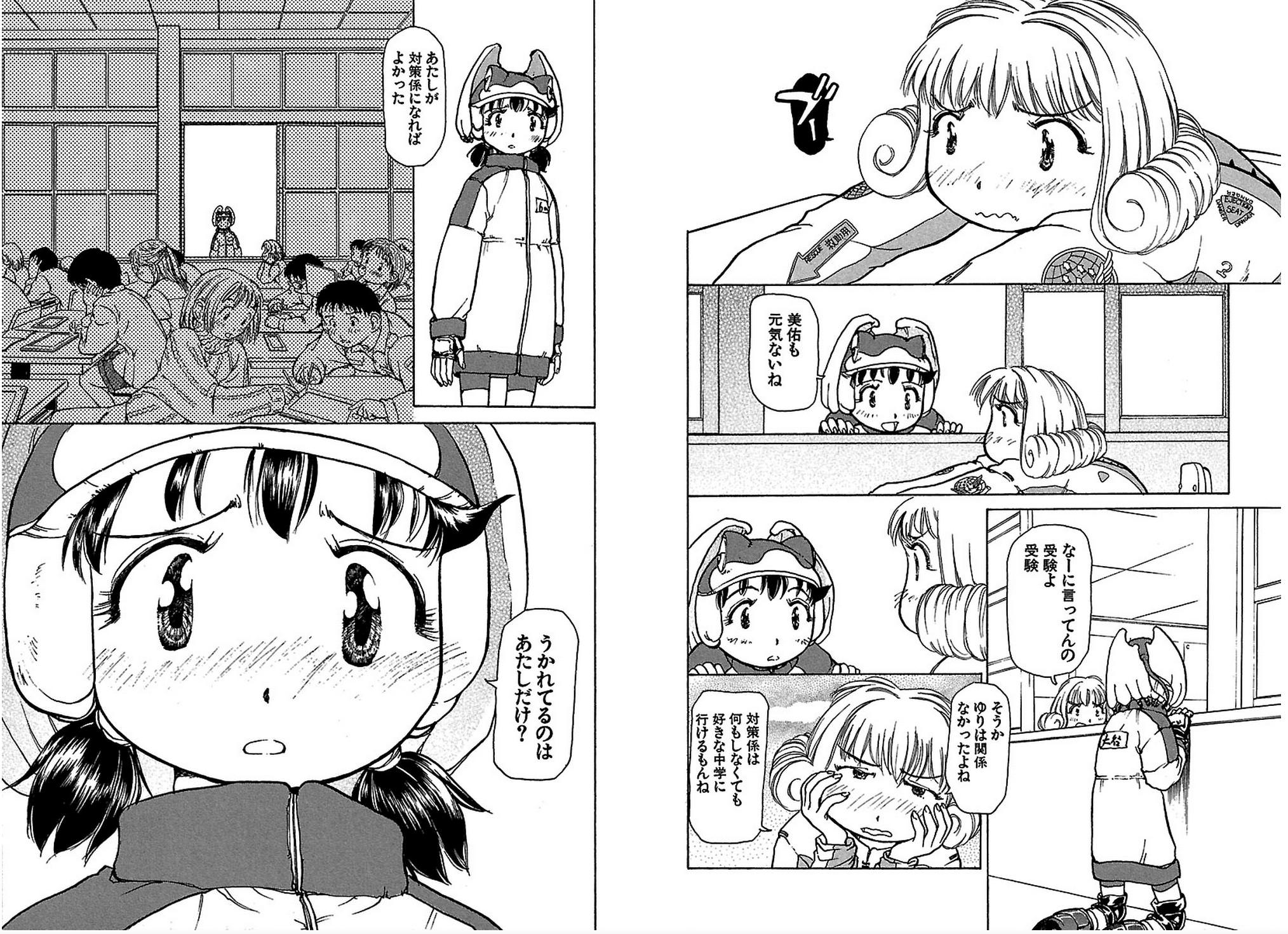 No one can remain children — human — forever.