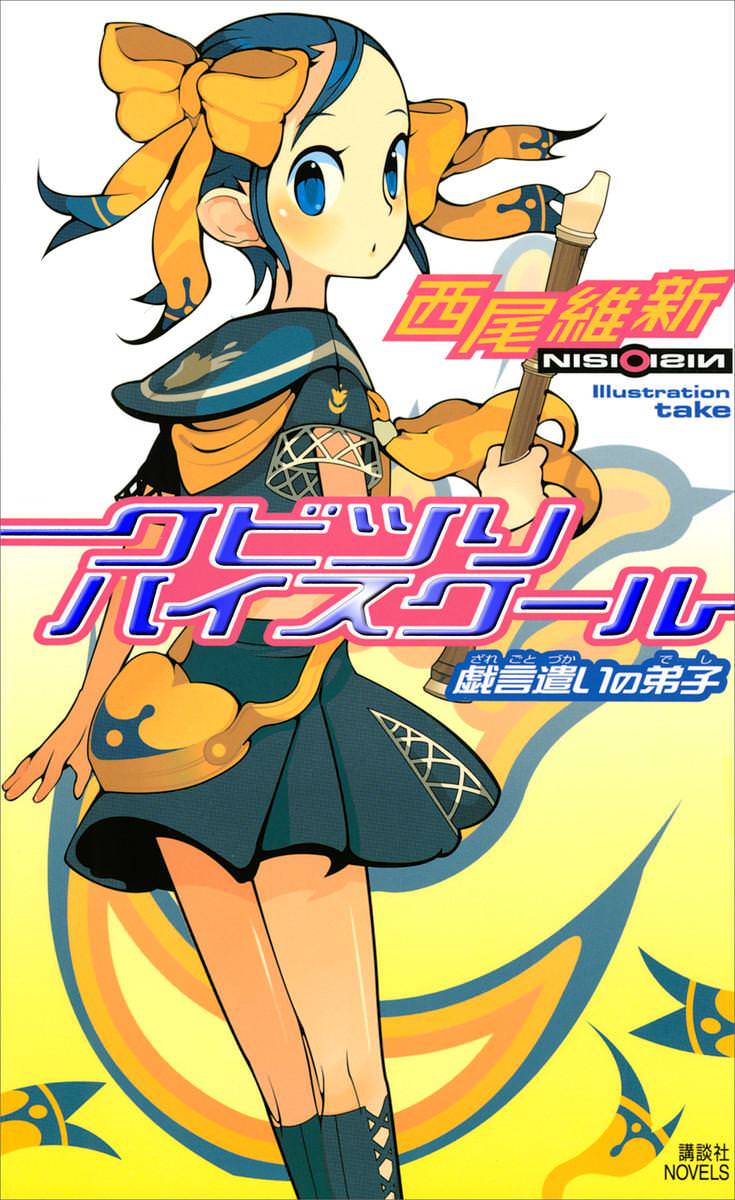 Even if the world progresses generally, youth will always begin at the beginning, and the epochs of the world’s cultivation will be repeated in the individual.
Johann Wolfgang von Goethe

It may be a surprise to some people that I haven’t introduced Aikawa Jun properly in the previous Zaregoto series posts so far. She plays an integral part in the end of many of the books and is one of the two characters who appear in all books (the other being Ii-chan).

So now is probably a good time to gush about her.

To put it quite lightly, I love Jun. She is a God. Jun is the strongest private contractor in the world. She could do anything and solve everything. I can imagine she could punch Thor in the face and make him cry for his daddy. According to Nisio, her power levels are equal to Kiss-Shot Acerola-Orion Heart-Under-Blade from Kizumonogatari. That’s how badass she is.

Also, she’s pretty hot too. Step on me, Jun, anytime~

But she also serves a huge thematic purpose too. She is the antidote to Ii-chan’s bullshit, to his nihilistic observations of the world. Ii-chan’s narration is unreliable in every sense of the word. We don’t have a choice but to see the world in his view, even if he may jokingly lie to us without a warning. His actions are intentionally vague and a big deal in the Zaregoto series is that everything is not exact. People who are used to reading history books or British novels may find themselves struggling to adapt to the discordant first-person narrative Ii-chan weaves for us. A character like Jun puts us back to a reasonable perspective of the world for she is the ideal, the strongest —

In the prologue of Friedrich Nietzsche’s Thus Spake Zarathustra, he introduces to us his ideal man: a man who could carry the world and not flinch at the pain. The ubermensch is a man who is over the concept of man: it shall be overcome. Jun is Nisio’s ideal human. She is beyond our human abilities and cannot be rightfully described under the category we call human beings. If she was a villain, she would probably be called a monster. But because she is a hero, we could say she is a “newtype” in UC Gundam-speak. A more-than-perfect human being. Her role is pave the royal road to success and show this path to everyone. She is a teacher and will teach us the “meaning of the earth”.

That is why her existence in the previous books is to shock the reader. Alongside Ii-chan, Jun is the one of two characters who appears in all the books. She would pop out near the end of books — always seemingly out of nowhere — to  highlight certain aspects of the mysteries Ii-chan can’t be bothered to solve by his own. However, her real reason is to teach us the moral of this little fable. It is thus fair to say her role is didactic: she lectures us about the ideal way of life.

But even though she is a compelling character in her own right, her role should be quite grating. Jun spells out what the themes of the books are. That’s overtly didactic. Being didactic can be seen as the death of art and, in recent years, be equated to a fundamentalist kind of literature. No one wants to be spat on the face about how there’s only One Truth. That sounds like religious bullshit. Umberto Eco exemplifies the sentiment best in the afterword of The Name of the Rose when he writes that “a narrator should not supply interpretations of his work; otherwise he would have not written a novel, which is a machine for generating interpretations.” It might then be odd to consider the Zaregoto series, something that certainly generates interpretations, to be didactic and Jun’s role is to be the one nagging at Ii-chan to learn how to live.

So why does Jun remain interesting when her role is to lecture a very bored Ii-chan? Her charismatic and reckless personality traits are huge reasons. But we also should think of a larger context. For a better perspective that will make sense of this conundrum, let us step back from the confines of the Ivy Valley classrooms and walk into a friendly Bookoff in Kyoto. Pick a book. Any kind of book. Maybe you’re not into mysteries but prefer something more level-headed and serene. In that case, a Miyamoto Teru book might interest you. His novels and short stories are critical examinations of a bygone era in Japan. 道頓堀川 (Doutonbori River) is a decent choice if you’re interested in the sights and sounds of Osaka. You follow a notorious chain smoker as he does his ordinary day to day activities in the bustling district by the river. The works give you directions, almost like they’re giving you a map to certain pubs and bars. And you might be a few dozen pages in before going “Wait a second, isn’t this like a tour guide book?”

A big deal of early Japanese literature is consigned to creating maps and repositories of information for the average literate Japanese reader. I shall talk about this more in regards to another Kyoto writer who enjoys writing tour guides in the guise of books about thirsty college students and tanuki, but Nisio is also influenced by this strain of thinking. You can, for the most part, go to these locations Nisio has written about and breathe in the same spaces the fictional characters of Zaregoto wandered about. The shopping district by Doutonbori River is in fact quite the date spot for Ii-chan’s harem in three books.

But that is one function of the didacticism found in Japanese literature. It grounds the reader in geography, more so if they have visited the places. I have recently visited Kyoto again a few months ago and I am somewhat amused by how much I know about Kyoto just from reading. If I read the Zaregoto series earlier, I could actually help my sister ditch Google Maps and point out which buses go to Kiyomizu Temple. This kind of writing is prevalent in historical fiction too because the writer has to research and immerse themselves in these maps.

Of course, people can argue that this is an accidental didactic mode (even though Japanese writers have explicitly said they are encouraging tourism — Morimi Tomihiko and Takeda Ayano are such writers) and in any case it doesn’t harm the narrative. But they don’t stop at maps: infodumps are common too.

Japanese literature loves information. A lot. If you read visual novels and get tired of reading the same infodump on Schrodinger’s cat (and it’s always incorrect anyway!), then you may not like Japanese literature in general. I have learned how credit card bankruptcy laws in Japan worked thanks to 火車. For some reason, いなくなれ、群青 explained to me the rules of some card game everyone knew how to play. 劇場 goes into some detail about stagecrafting and Winning Eleven. And so on. Regardless of narrative relevance, you are going to learn something.

Even if you find a Japanese book that doesn’t infodump, you are still going to have long swaths of dialog that read like lecture notes from a polemic. Characters are more or less symbols when the novels go into this mode. With this, let’s go back to the Zaregoto series: Jun is the ubermensch and she is going to tell you why this is good. Ii-chan, don’t be so self-deprecating. You are good. Dialogs like these go on and on forever and Ii-chan might not even say anything. He could remain silent (“…”) or his narration might say he had nothing to contribute. The narcissism of Jun is duly noted by Ii-chan, but we also get the impression that we should listen to the lessons she is trying to impart too. She wants to teach Ii-chan about the world.

And so, Kubitsuri High School is another continuation of that, this time set in a school setting. We get to meet a cute character and one of my favorites, Yukariki Ichihime (紫木一姫), who is a high schooler in Sumiyuri School (澄百合学園). At first sight, the school is the ultimate Class S setting and their school uniforms are highly prized by school uniform aficionados. But no one has ever entered or exited the school — even Tomo, a huge fan of uniforms, couldn’t grab one and she is supposed to be almost omniscient. It is up to Ii-chan to crossdress and go undercover to meet Ichihime. The book, it seems, is originally envisioned as a side story for a mystery contest on locked rooms (Psychological seems to be written before this) and isn’t really too important to the main narrative arc in Zaregoto.

But it is in this book that we get the themes beginning to be spelled out for the whole series to come. Ii-chan hasn’t grown up yet, but he admires Jun for her bravado. He becomes a mentor to Ichihime, even though he acknowledges that he may be one of the worst teachers in the world. But Ichihime respects him on another level. Not in the “teach me Math” kind of way but as a role model. This respect alters Ii-chan and he begins to change, going through the same growth the world of Zaregoto once went through.

Kubitsuri’s storytelling techniques and ideas will echo again in the final novel of the series, Nekosogi Radical. Both Kubitsuri and Nekosogi are battle shounen-type novels and drop the pretense of mysteries. Yet, they are also about growing and teaching others to grow as we grow older.

Kubitsuri is the weakest entry in the Zaregoto series, its accomplishments are subtle but astounding. They aren’t obvious at first, but the book reveals bits of Ii-chan’s backstory and foreshadows his future status as a mentor of life — the same way Jun is to him.

And this is when the series begins to take a higher moral ground. Ii-chan and Jun become more than just characters: they become symbols and teaching tools Nisio uses for his own purposes.

Instead of drawing diagrams on the chalkboard, Nisio writes scenes and more scenes as his lesson plan. He never grows tired of his work like a professor who has fallen deep into his research and we, the students, crave for every drop of wisdom he gives. His classes on adolescence and nihilism in the context of mysteries are provocative and don’t always get us prepared for the exams, but every digression he enters makes us think about what we know and — more importantly — how we know.

We cycle between the roles of teaching and learning in order to better oneself. And that is the didactic mode that the Zaregoto series is in. It is blunt and exhaustive — an act of force by our own sensitive Western standards — but it straightens our zigzag approach to its themes because it wants to teach.

In the end, we are still students who hesitate at our lack of experience; yet, we must teach. That is why we grow as people.

No more zigzagging, we need to feed some mad dogs.

4 thoughts on “Zaregoto Series: Kubitsuri High School and the Didacticism of Japanese Literature”