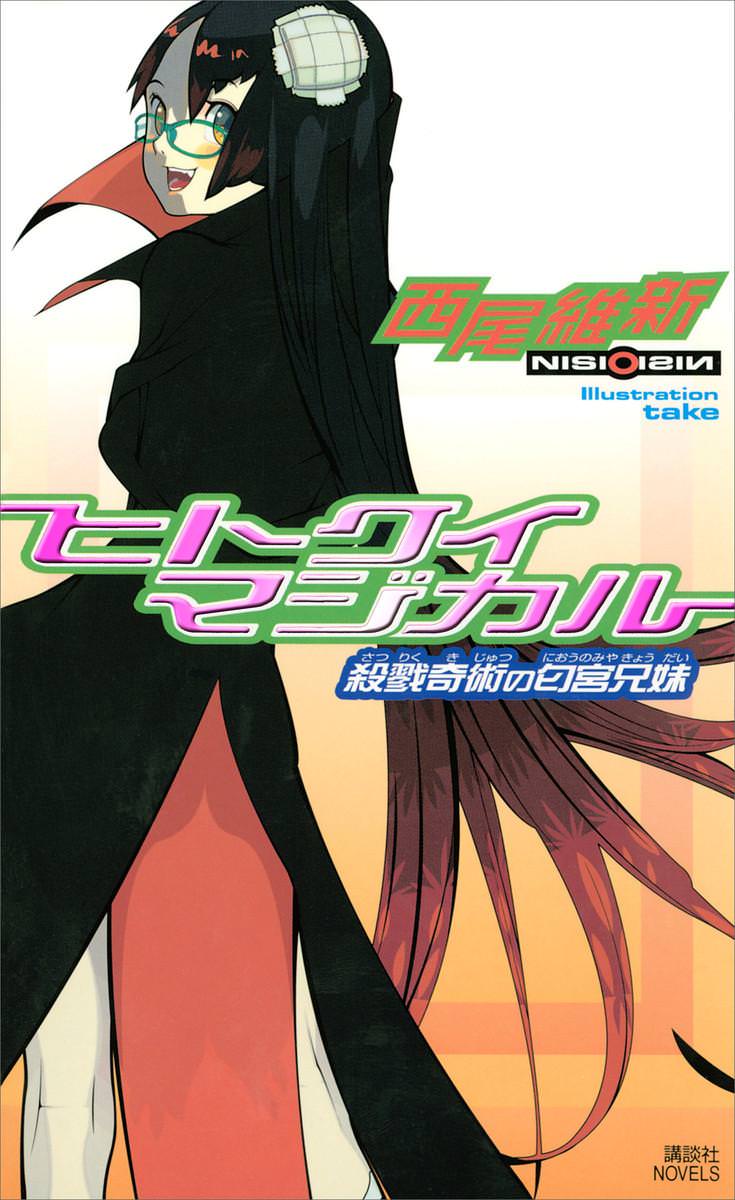 There are two types of people: those who like fate and those who don’t. The former finds meaning in any event, no matter how disparate and contradictory, while the latter is obsessed with having free will and therefore being responsible for their own actions. Whatever philosophy on destiny is espoused reveals what people have in mind as important. Certain acts are prioritized, others are excused. Knowing this provides us a wealth of information on who someone is and how they plan to live their life.

It is no wonder that many writers have written soliloquies about fate. Their interest in where their artistic ambitions may lead them next is important biographical material and gives us good insight into the themes of the work. Characters are wrapped by their thoughts on destiny, whether developed or not, and there is joy in unwrapping these as a literary critic or a passionate reader of their work.

Unless your penname is Nisioisin and you’re writing a character like Ii-chan.

Ii-chan has little time to ponder about the meaning of life. He has to pay for Yukariki Ichihime’s tuition. Ever since the events of Kubitsuri, Ichihime is staying with Ii-chan and enjoying her new life as an ordinary high school student. However, it comes at a cost: she has no money but the sponsorship of a college student who is just slightly above the poverty line. Thus, Ii-chan goes against his name as the 戯言遣い and takes a no-nonsense approach in searching for a job.

It just so happens that the acclaimed professor Kigamine Yaku (木賀峰約) is looking for someone to hire as an assistant. Her research project is ambitious to say the least: how to not die (死なない研究).

If there is one thing that is certain in life, we will all die. Whatever our destiny is, the end goal is death. But if there was a way to stop death and thus enable us to be immortals, it would demolish the concept of fate. Death disappears; fate is extinct. Immortality is thus the ultimate expression of free will and we can keep on living without ever feeling the need to close our books. The stories of our lives shall never end — or for the literary-minded, there shall never be any more endings to literature anymore. The end of endings will render our conception of completion obsolete. It is one of the greatest research questions of humanity ever since the days of alchemy, and the answer is in Kigamine’s research institute if Ii-chan is curious about it.

Such high proclamations will of course rouse anyone’s curiosity, even the disinterested Ii-chan. But he is the third type of person, in regards to the philosophical stance on fate: he just wants money. If he is able to bring around two people to the institute, he will be able to not worry about tuition fees for a while.

The experiment involves Madoka Kuchiha (円朽葉), a girl who is unable to die (死なない少女). She is ageless. Immortal. 800 years old and still counting, she looks like she is still in high school. Kigamine needs people to help observe Kuchiha and thus crack the code to avoiding death.

Along the way, Ii-chan meets an adorable girl named Niounomiya Rizumu (匂宮 理澄). She calls herself a great detective (名探偵), despite wearing a prison uniform. She is also quite the klutz and will often faint in the middle of the road. Apparently, she gets so excited about her investigation that she forgets calories help her move. Rizumu doesn’t seem to have the rhythm of a detective to be honest, because she is on a wild goose chase: searching for someone whose location is already known isn’t really good detective work.

But she is cute, and cuteness is the greatest excuse for bad, clumsy work.

Her split personality however is not the case. Niounomiya Izumu (匂宮出夢) is also known as the Maneater (人喰い) of the Killing Field (殺戮). He doesn’t fuck around either and will bite into your neck like a vampire. Izumu is a hired killer (殺し屋) in a world where families of serial killers (殺人鬼), assassins (暗殺者), and shinigami (死神) battle it out for reputation and money. This “other” world, a world Ii-chan never sees, is as lively as the normal world. Anyone born into this world has no destiny but to fight for their lives.

It is this clash of worlds that becomes the backdrop for the Zaregoto setting. Previous books have given us insight to this other world, but in Hitokui and the final books collectively known as Nekosogi Radical we are now in a fantastical setting of murderers and monsters whose existence breaks any rules of mysteries — the rules of our world. We expect other people to conform to physical laws of nature, but these people seem ready to twist and strangle them.

In both worlds, there are still rules that apply: Killing in Zaregoto is still treated as a despicable act. After all, there are no moral grounds for the act of murder. It is impossible to shift the blame toward others. Yet, that doesn’t mean people will stop murdering others. It may not be possible to stop someone who has killed once; it is part of their fate to charge at other monsters like them and never look back.

How shall we explain that kind of philosophy? Living has never been easy to explain, but this is completely alien to us. If we imagine ourselves to be in this other world, what is the meaning of life then? Is there even a method to living in such a hellhole?

Rarely do we get any insight from the perspective of Ii-chan when it comes to this matter. But we still can sympathize with these people. We can’t empathize however: that implies we can understand. Sympathy is all we can muster because there is a barrier between us and them.

So to us normal humans, we don’t understand them. We can’t imagine the horrific act of killing, let alone committing more of it to survive. They have to be inhuman; they have to be other-ed and deprived of the shred of humanity they may still have.

After all, many of us can only read about this violence in mystery books. It is a work of fiction. Flinging daggers is something we only see in the movies. It’s why we can enjoy reading books about crime. We can be grossed out, but we don’t have to care much about it. Understanding it isn’t really our priority.

Yet, fate does lead the rest of us into this more “fictional” otherworld. Everyday violence is normal. Triads, gangsters, and secret societies are a thing. I have seen situations that would work well into Hollywood movies, but I have difficulty rationalizing any of these actions people have to do. They do it just to live. It is their fate. Fate is the only explanation as to why some of us are living in hell.

Stuart Hall in Cultural Studies 1983: A Theoretical History describes this conception of fate in his analysis of Hoggart’s The Uses of Literacy as “the language of a class without any command on history. It’s the language of a class to which things happen, not of a class which makes things happen.” We don’t make fate; we let it smack us in the face. We may not be assassins or ninjas fighting in a battle royale, but we are living too. We understand the consequences of violence and death and that characterizes our fate as well.

This gap between worlds — real worlds unlike Zaregoto‘s — is real. As someone who is able to cross between two disparate worlds, I find that people have different priorities — different fates — and thus embark on journeys that only they can take. They have their own stories to tell that can be similar to mine, but I can also spot the differences and why they have to do what they need to do. This observation brings to mind something Jean-Paul Sartre in Characterizations of Existentialism said:

Sartre himself was looking for his fate after the events of World War II. He was young, active, and looked toward a destiny that told him of his aspirations. Like many young intellectuals of the postwar decade, they wanted action — they wanted fate.

They were inspired by the wisdom of Nietzsche quote, now memorialized in Victor E. Frankl’s war memoir Man’s Search for Meaning:

Those who have a ‘why’ to live, can bear with almost any ‘how’.

Fate tells us why we should live. The “how” is the means to achieve that fate. Sometimes, that “how” appears to be quite obscure and contradictory to our philosophies. We are in different worlds and thus different contexts. When we recognize there is a gap between those worlds, then we will be able to empathize with those who are not of our world and learn to love their fates too.

That is the main crux of Hitokui Magical (ヒトクイマジカル 殺戮奇術の匂宮兄妹): it abandons the mystery genre at last and focuses on our battles of fate and destiny. Our logical rules of mystery don’t apply to the dog-eat-dog rules of others. Their fates and our destinies never match up at all, but their lives matter as much as ours. Sometimes, we just can’t understand their more-than-human instincts and rationale. We may see this as an inevitability, but decisions have to be respected.

Even if we can’t comprehend it.

For fate is none other than action. To clash with the workings of fate means to give up and rot. It is the opposite of living, of action. Inaction, not death, is what stands as the opposite of life. Only fate makes us move to where we need to go.

Avoiding death can only postpone that fate, that action, that destiny. We all have to die someday and close the book to our lives. Running away from it isn’t something we can do forever. The inevitability of fate impels us to act.

It is this journey that Ii-chan (and by extension us the readers) must understand. People are going to places we can’t always reach, and it is a matter of growing up to respect that.

The Zaregoto series is nearing its end and we can’t stop it. It has to end and we have to let go. It has a fate — a mind of its own — that even Nisio the creator can’t really handle by himself. Its life is drawing to a close and so we should get ready to say goodbye to it.

It is the only way for this story to end. Fate has foreshadowed its death. It lives and dies, but it remains immortal in our hearts.

After the party, after Halloween, what is next for us?

4 thoughts on “Zaregoto Series: Hitokui Magical and the Inevitability of Fate”