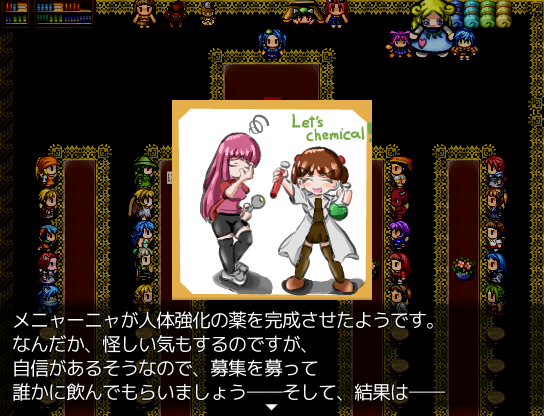 RPG Maker is a successful line of video game creation software developed and published by Enterbrain. Quite a number of popular and interesting games are made on these engines. You can buy these software on Steam to make games nowadays, but for the purpose of this post I am going to limit to what’s important to the consumer who just wants to play these games.

Where do you find RPG Maker games?

Some games like the English translation of Helen’s Mysterious Castle are found on Steam and even on consoles. But the majority of these games is going to be on sites like RPGMaker.net and FreeM!. Well-known VIPRPGs are accessible and curated on this wiki.

How do I install them?

This is where things get a bit complicated. If you want to play Japanese RPG Maker games (including ones that are translated) but haven’t switched locales or have no clue what I just said, please look at step 0. Otherwise, skip to step 1. For Mac users, please skip to the section on EasyRPGMaker or, well, just install Windows lol.

If you have no idea what a locale is, this is likely the step that’s confounding you from installing the Japanese RPG Maker game properly. For the purposes of this post, the locale is necessary for file paths. Japanese programs do not use the standard \\ and instead use the yen sign.

To take a random example from my computer, this is how the file path looks for me:

If your file paths don’t have the yen sign, that’s a surefire way to know that your locale is still not in Japanese.

Without this “quirk”, programs usually can’t find where they need to go. Error messages like “the file path is missing” or “can’t find the file title” will pop up instead. You want to fix this.

There are two main ways to overcome this: AppLocale or switching your locale entirely. I’m not a fan of the former as it’s a temporary measure and doesn’t have full compatibility with the games I play. The latter is easy to do and makes you play other Japanese games successfully without compromising anything. You can still use English software including RPG Maker English versions too.

So let’s do that instead:

First, go to the Control Panel.

Then, click on Change date, time, or number formats under the Clock, Language, and Region header.

A window should pop up. Click on the administrative tab and press Change system locale.

After restarting, right click on any icon and select properties to see if the yen sign appears. You should be in the Japanese locale.

RTP (Runtime Package) is the base of every RPG Maker game and it’s what the whole enterprise possible.  It holds the default assets, systems, and scripts. The rationale behind this is to save space and that most games are going to use the same code anyway. Installing the same things forever and ever again is inefficient.

However, this is usually poorly explained and honestly not that user-friendly.

The websites for RPG Maker games should tell you what engine it’s using and the language used is, well, obvious. In translations like vgperson’s titles, it’s going to be in Japanese.

Once you have figured this out, the English RTP and the Japanese RTP are linked here. Download the appropriate RTP (or if you’re lazy like me, download all of them) and install them. This will work for all games associated with this language version of the engine, so you don’t need to return to those sites ever again.

Open the folder of the RPG Maker game you want to play and just run RPG_RT.exe. The game should boot up normally and now you can play the game.

Note that older games tend to go full screen without a prompt so use Alt + Enter to go into windowed mode. If you hate fullscreen on startup, read the section on Tools and Accessibility below.

If you’re playing a VIPRPG, the executable file will not be in the folder. Copy the appropriate version of RPG_RT.exe or just use a loader or Fatalmix as discussed below.

And that’s the whole process of installing the game.

(And oh, if you’re wondering about the 95 series, all you need to do is just click and run.)

This is a modified RPT_RT.exe that works for both language versions of 2000 and 2003. It allows you to make your player character move at lightning speed, auto-win annoying battles, modify flags, quicksave without the need for save options, and more. I recommend downloading this if you see yourself playing RPG Maker 2000 and 2003 games forever. Even if you don’t want to cheat, this is a very useful tool in terms of accessibility. Note that it doesn’t work with later editions.

Also, this loads the game in windowed mode and fixes some issues with memory.

As the name suggests, you can drag .zip files to the loader and play it from there. It works from 2000 to MV (only the executable file), but it requires Microsoft .NET Framework 4.6.2.

Just like Fatalmix, it loads games in windowed mode and fixes memory issues.

A cross-platform software that lets you play RPG Maker 2000 and 2003 games easily on all platforms without the RTP nonsense sounds like a dream come true. Unfortunately, not all games are compatible with this and it doesn’t have the tools found in Fatalmix yet. But for Mac users stubborn in going Windows, this is one of the few viable options to play it. Just don’t be surprised if it doesn’t work as it’s still in development.

What are some free RPG Maker games that are must-plays?

Besides the previously mentioned titles, I recommend the following titles:

They’re all titles that I will one day write about…

Make sure to read the articles found on the Furige and VIPRPG directories too. Not all are on RPG Maker, but a good chunk is.

This article will be updated if enough people ask about something related to RPG Maker. I hope this article is useful and fun to read!

8 thoughts on “RPG Maker Games FAQ: How to Play Them and More”