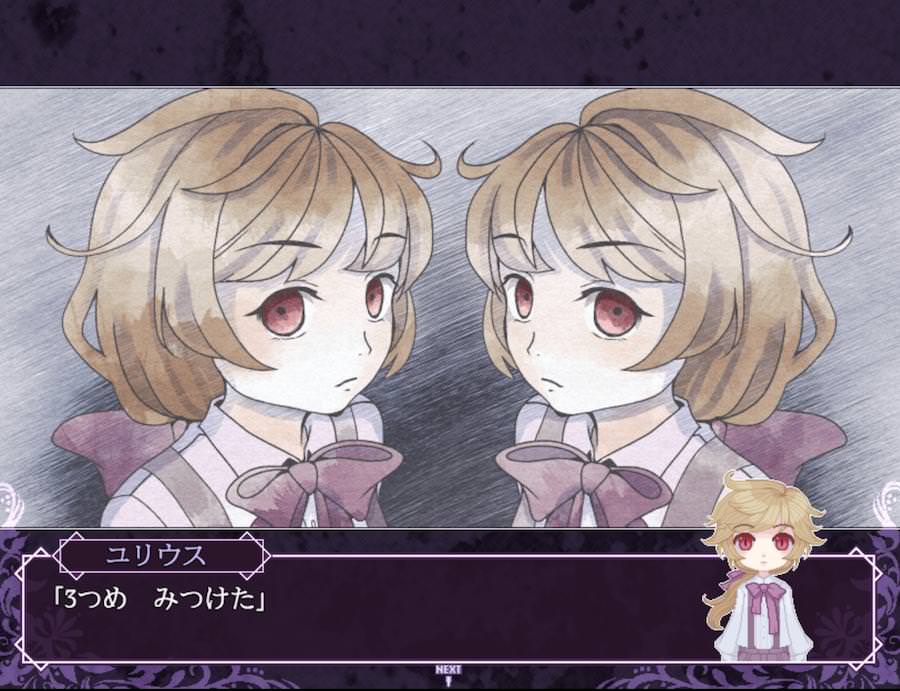 Hello and welcome to a new series I’d like to call “Short and Cute Indies”.

There are many doujin and indie games out there that deserve a mention or two. I’ve been playing some free Japanese games and they are so good they should get a shoutout from me. While I know most people who read my blog don’t read Japanese, I hope this inspires discussion and interest on this extremely unknown field of doujin games and more.

I also intend to write posts on Western indie games I’ve played and enjoyed in the near future. After all, games that are good should get a shoutout. It’s the only neat thing to do. I have curated a small list of games I’ve played on Itch.io and will be writing about them in full detail later.

So without further ado, here is the first installment of hopefully a never-ending series on cute and short indie and doujin games I love and enjoyed. 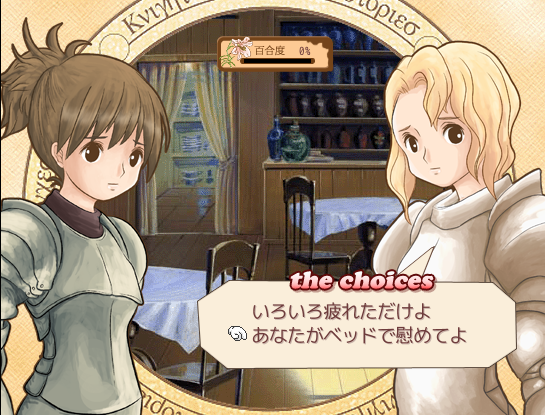 I love stories about knights and princesses. They are romantic and cute. But what if they’re gay girls who really like each other?

王女様と薔薇の騎士 is a short but charming video game about a knight named Galatea (ガラテア) who swears her life to protect the cute princess Ateraceae (アトレイシア). Revecca (レベッカ) joins the royal squadron as Galatea’s student and the three of them adventure into the unknown and unravel a conspiracy lurking in the kingdom.

Once you start exploring the world, you are bombarded with several dialog choices in what is usually a typical conversation in a fantasy setting. There is the normal response, often a simple agreement that you and I would say in a Starbucks or some conventional setting. Then, there is the gay response. Galatea can hit on various girls and even a maid who has a crush over her dashing looks. This option not only leads to girls blushing with happiness but it also increases your yuri gauge (百合度). The higher it is, the gayer the dialog choices become. 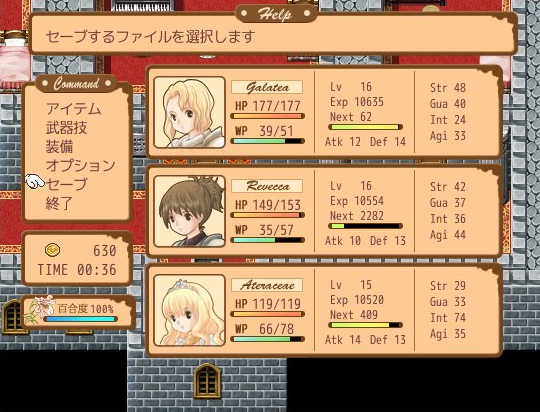 In fact, near the end of the game, Galatia can invite Revecca, Ateraceae, or even both into her bedroom and they can have a cute sleepover together. This is not difficult to accomplish, but it feels like a feat to see three girls happily sleeping together in peace. It is what many people would call “bliss”.

But being gay is just one part of the game. The battle system is quite inventive and different from many battle systems in conventional RPGs. There are several weapon types and each individual weapon has its own particular set of skills; some of these skills can only be unlocked if you use them enough. Every weapon and skill have their own unique animations and it’s a spectacle to see original hand-drawn sprites go around the screen whacking enemies with their sakugay powers.

Unfortunately, the potential of the battle system is put into waste because the game is way too easy. Your characters level up very fast and the enemies don’t scale up. You can actually reach level 99 without trying too hard. Losing a battle is almost impossible and the final boss is a pushover. 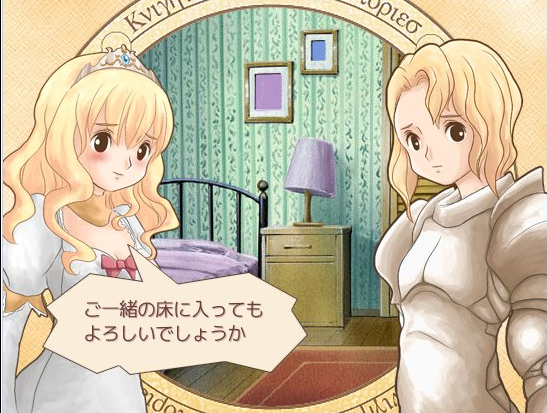 But that may be a good thing in the end if you’re just interested in the yuri and not the game design. The setting is more fleshed out than you would expect and the yuri gimmick doesn’t feel like a gimmick; it gay marries the mechanics and the characters together. And the dialog is hilarious and filled with adorable innuendos thanks to the delightful bantering between the girls.

More people should play this game and see how gay this game gets. It’s a free game filled with wonderful gay surprises and I’m sure that even if the game doesn’t impress you, it will leave you craving for more cute yuri. 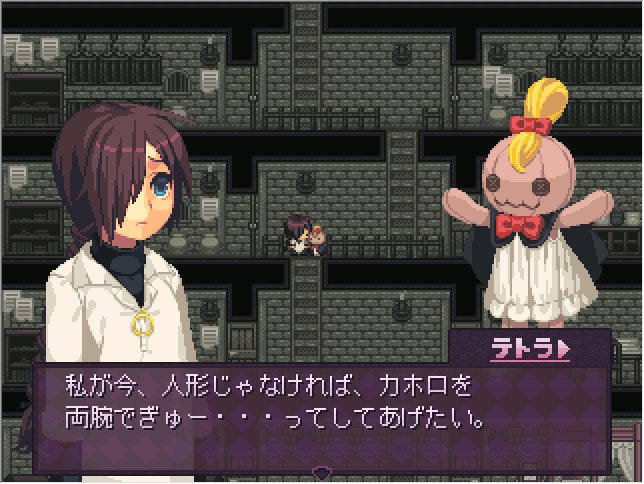 A foreboding tower haunts the village. An evil witch resides there and she seems to have come out of nightmares in fairy tales. It is said she was searching for immortality, but she has not stepped out of the tower since eons ago. People have been disappearing and nobody knows exactly why. All they know is the witch did it.

Kahoro (カホロ) learns of this tale from their grandparents and believes the witch may have a cure for their peculiar illness. They run away from their home and enter the tower with the hope their nightmare will finally end.

But instead, a new dream begins. Kahoro meets Tetra (テトラ), a doll and the ex-servant of the witch of the tower. An unlikely but powerful relationship blooms between the two and their little story is what the game is all about. 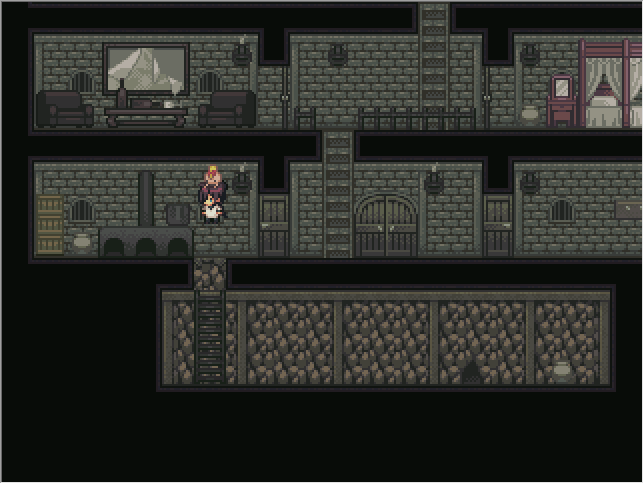 Closer to a walking sim with visual novel/ADV elements, カホロとテトラ makes you control Kahoro to search for keys in the room. These are just flags for the two characters to interact and talk about their lives before the tower. They touch on some potently queer subjects that not many video games dare to approach.

Kahoro is neither male nor female. They are sexless. And while they may look like they’re twelve, but their immortality has disguised their age (they’re in their twenties) and even their genitals. They are sexually confused and can only find validation in a doll, another asexual and agendered being. Yet, Tetra is more than willing to empathize with Kahoro’s queer (in both senses of the word) life. Just like Kahoro, Tetra is a literally displaced doll that may have been abandoned by the witch. The witch seems to have changed personalities over the years because Tetra remembers them being kinder and friendly.

This relationship is “unconventional”, but it also shows there is something beautiful in the different, the eccentric, and the unusual — the queer life. Sokonobe Souko previously made a game titled それほど遠くはないところから where they explore the romantic relationship between two guys in different guises. But カホロとテトラ is their most successful project because it has a straightforward approach to the muddled world of feeling like you exist and don’t exist. This is where the authenticity of Kahoro’s and Tetra’s relationship comes from: their relationship is not something we would call normal, but it is a relationship all the same. 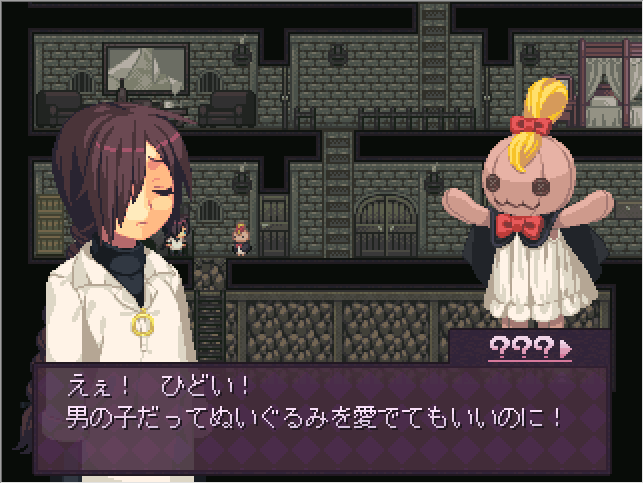 And that’s sort of how the game works. It functions on its own logic and aesthetic. The setting of the game is told through interactions instead of being shown and we get more out of it because the two characters are just that strong.

It’s a brave game for doing its own thing and not giving a damn about how other games work. And that’s something that has always impressed me when I play indie and doujin games. Little can be said about the true and done, but we can say more about what may be false and wrong.

カホロとテトラ precisely does that without a single note of hesitation. It revels in its eccentricity and searches for something more. A one hour game shouldn’t be this memorable, but it is and that’s why I have to write about it. 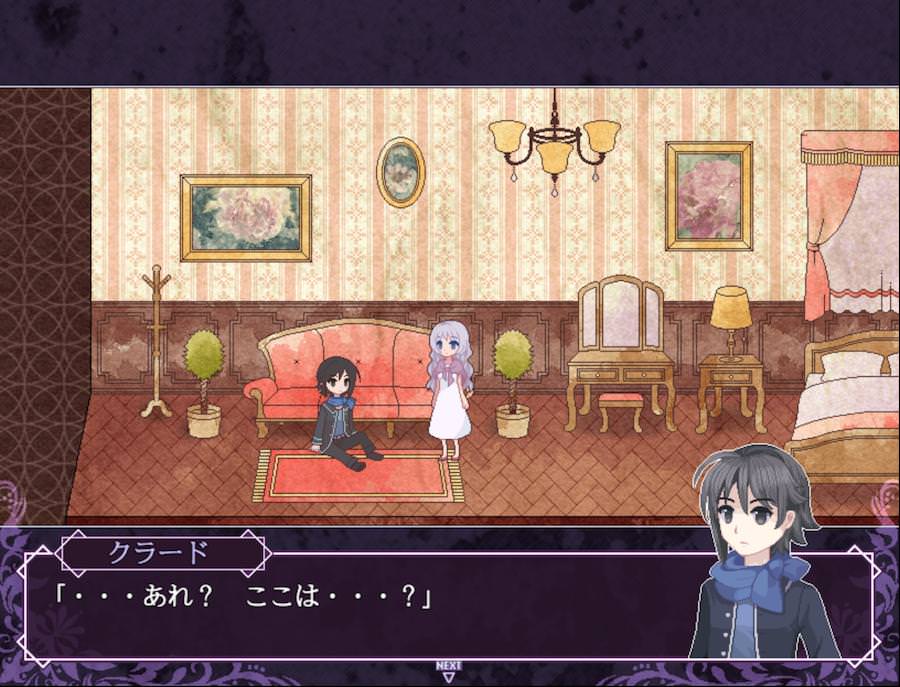 The last game for this post, サイレントフィリア, is probably my favorite of the three. I remember I was in one of my many insomniac bouts when I found this game; I finished it in one go and I never felt this satisfied from a game in a while.

Curado (クラード) has always been a lowly servant of Philia (フィリア) ever since he was adopted by her family, but one day he wakes up in an unfamiliar room and sees Philia frozen in place like a statue. Two kids — twins, actually — barge into the room and ask Curado to play a game with them. If he can find the doll parts they have hidden throughout the mansion, they will give him a potion that will cure Philia.

So you take control of Curado and go around this massive mansion — all hand-drawn of course — to find the doll parts. You can probably guess where the story leads you to, but as you read more of the setting, it’s not that simple. 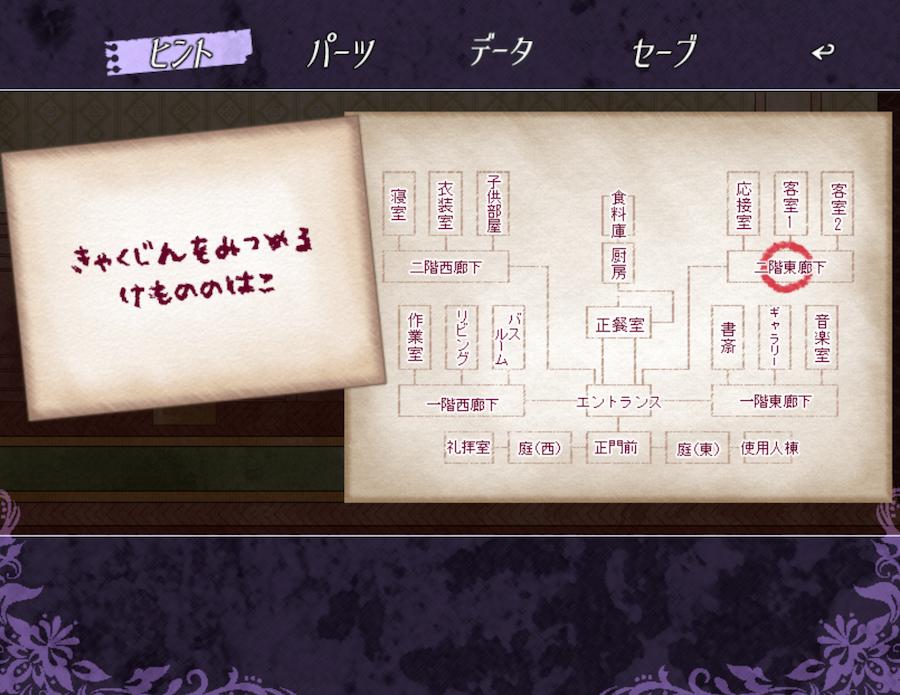 The twins are unstoppable monsters who can play god if they feel like it. They don’t see Curado and Philia as human but as dolls; they probably don’t even understand what humanity is because they were never privileged to have a family.

But Curado and later Philia empathize with their fates. Through flashbacks, we learn that Curado is orphaned and Philia has lost her mother. They are struggling against the aristocracy which demands them to act in a certain way: be this and that. Because of who they are, they can’t and feel lost — even alienated from each other.

The twins are drawn to them. They don’t understand why, but they feel a connection toward these “dolls” and thus learn what humanity really means. In fact, these four characters begin to form a family without them realizing. 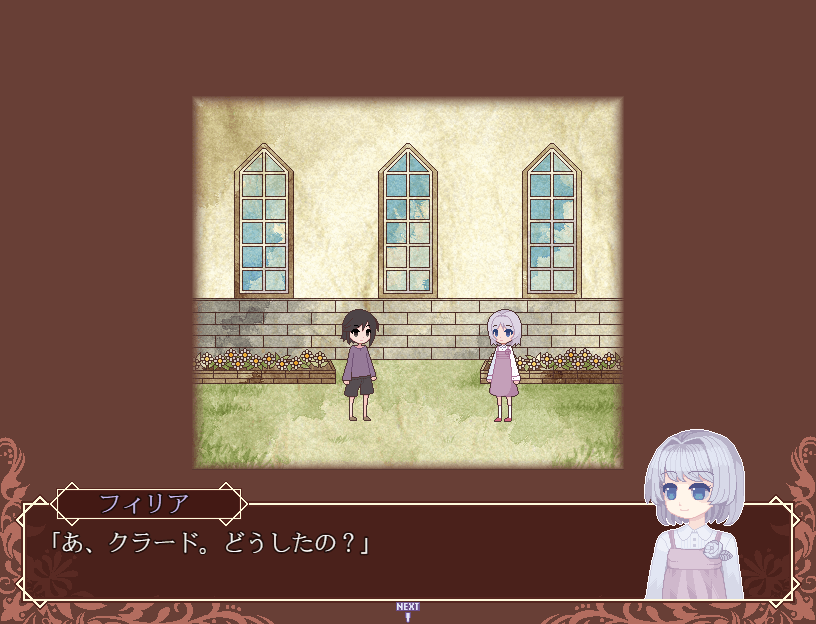 The themes of the game are so heartwarming and overpowering that any of the problems that may have popped up in the game don’t really have an impact on it. The writing is polished and the setting, with its quirky laws of magic, is amusing. Nothing is overtly grim nor sentimental.

サイレントフィリア just hits the right notes for me. It’s a sweet little game I’d like to see more people check out. There’s nothing grand about it, but I’m sure everyone will feel the swirls of emotions the twins have near the end of the game.

Cute games always know how to make my heart break…

Well, that’s the end of this episode. I hope people have found something to play or aroused at least some interest. I am open to suggestions on how to improve this series and what people thought of it as well as the games.

Thanks for reading and look forward to the next episode in a few months!