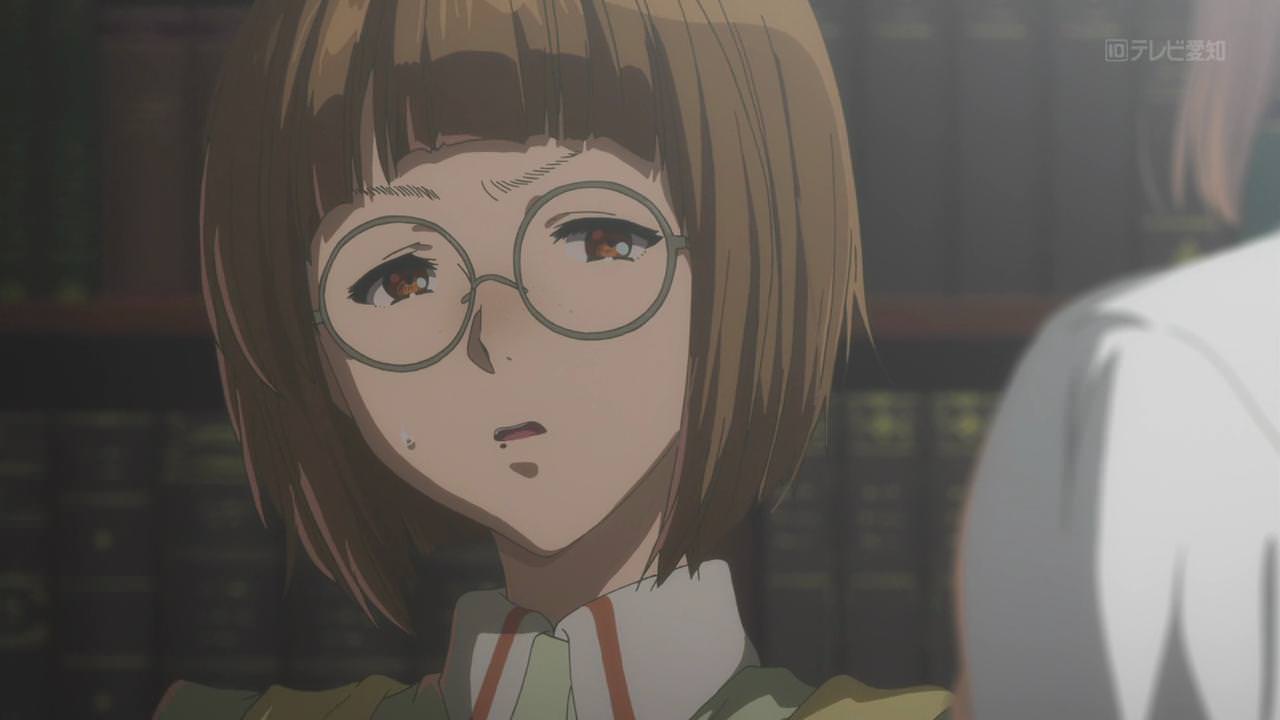 Welcome back for another Adaptation Notes on Violet Evergarden. I’m beginning to feel that this might be a fun project to write about once I get the hang of things. It’s pretty fun to write these posts. As usual, I am always welcome to feedback and what people are interested in from these posts.

Everything here is anime original

So let’s cut to the chase: this episode is completely anime original. I got nothing to actually compare to. All I can do is offer insight as to why there is even an anime original episode like this in the first place.

As mentioned previously, the post office setting has always existed in the books. However, it isn’t fleshed out at all. Cattleya, Hodgins, and Benedict are from the novels; yet, Hodgins is the only character who gets a lot of screen time because he is relevant to Violet’s and Gilbert’s backstory. Iris and Erica are anime original characters added into the post office and we see them finally walk and breathe in the same space as our titular character.

This is important because Violet is an extremely passive protagonist. She does not have agency. Her motivation to do anything is weak: she just wants to learn what love means. You need characters pushing her around to make her change. In the novels, the chapters focus on the clients Violet has while she types their letters in the background. Since we haven’t gotten to her working in the field yet, it is Erica’s time to shine.

Erica does not know how to communicate well, much like Violet. She sees herself as unfit for the job actually and thinks in the end Violet is far better suited for the job than she ever is. Erica is the only character who is able to connect with Violet and both characters have an unusual bond: If separated, they feel like background characters who are in the foreground for some reason — but together? They make quite the duo because the episode focuses on how humans are bad communicators, even if we have prepared what to say from a script.

On the right wavelength?

The anime has this little arc with Erica because they want to show you how much of a child/robot Violet is. She treats everything as an order from the military and she doesn’t understand what we often think of as subtext. You don’t see that behavior in the books much, but the anime exaggerates it for this episode. She really doesn’t know anything. Violet messes up because she cannot empathize with others. That’s why Erica and Iris are annoyed by her — and why Erica wants to help her succeed.

Because we literally see her grow from the onset, she is infantilized and needs people like Hodgins to take care of her. This can rub people off the wrong way. To explain this, I’d like to briefly talk about the Jean Webster novel Daddy-Long-Legs:

Jerusha Abbott is an orphan who seems to have no future until she finds herself attending a prestigious college thanks to a mysterious benefactor. The benefactor sees her as potentially a great writer, but the only condition he asks is to send him (a “Mr. John Smith”) a letter once a month. A great writer is after all a great letter writer. Jerusha takes this opportunity and learns to be independent; she makes a studying regime to make the best out of her education. She once saw a glimpse of her benefactor and decided to call the Mr. John Smith “Daddy-Long-Legs” because he has long legs. Near the end of the book, she finds out the man she had a crush on was in fact Daddy Long-Legs.

Daddy-Long-Legs displays the paradox of early (or proto-) feminist works in the 20th century: it shows the independence and dependence of women simultaneously. The anime adaptation seems to have that as well.

The book largely avoids this problem by showing a more matured Violet going around the world typing up letters. She asserts her independence against Hodgins by doing what she believes in. Violet knows what she wants and she will do whatever it takes. It is difficult, on the other hand, to understand Violet’s anime characterization. She doesn’t have a thought (nor seem to care) about her situation and it makes it hard for an outsider to view her relationships with others in a positive light.

While I previously wrote about Violet in the anime as a far more relatable character, it can be problematic if the relationships aren’t handled well. After finishing the first post and reading what people have to say about the anime, I realize that the relationships presented in the first episode can be a bit demeaning to Violet’s character. It was something I felt obligated to bring up the next time I wrote an Adaptation Notes.

In the case for this episode, I do think the “babysitting” is alright. Maybe it’s because Erica is doing it that makes it easy for me to stomach the thought. Unlike Hodgins who sees Violet as someone to take care of, Erica sees Violet as a peer — an understudy who is ready to learn. If the anime continues having these peer-like relationships, this Daddy-Long-Legs problem can be a non-problem soon.

So you can probably tell I like Erica’s role in this episode. She negates the problems I previously have and I think she is kinda kawaii. Violet Evergarden needs characters like her to succeed and counterbalance the passivity (and the infantile nature) of the titular character. She is seriously great.

But her narration during the credits roll about what Auto Memories Dolls are and how they work in the ghostwriting business… it is SO OVERTLY SENTIMENTAL. The story she is narrating about comes from the novels, but listening to her talk about it make me realize how cheesy it actually is.

As I said in the previous post, the cheese can be a huge problem because it’s almost like a Hollywood film stretched out to 14 episodes. This is going to be a more subjective issue than the others and I get the feeling people who are already enjoying the show might not have this problem.

But I think I am quite allergic to this particular kind of cheese. I worry about the future if I have to write twelve more posts about this anime. This is not to say the second episode wasn’t enjoyable and fun — I liked this more than the first episode’s big splash and it fit with my bias for low-key works — but all I can help is think about the cheese.

I get the feeling I’m going to talk about cheese all season long.

In the end of these posts, I may be linking other Violet Evergarden articles by fellow writers that offer some interesting insight to the work. So far, I enjoyed reading Atelier Emily’s “Victorian Flower Language and Violet Evergarden”. Hopefully, there’ll be cool articles to read about Evergarden in the future and I can link them in these posts. I love reading discussions from other people.